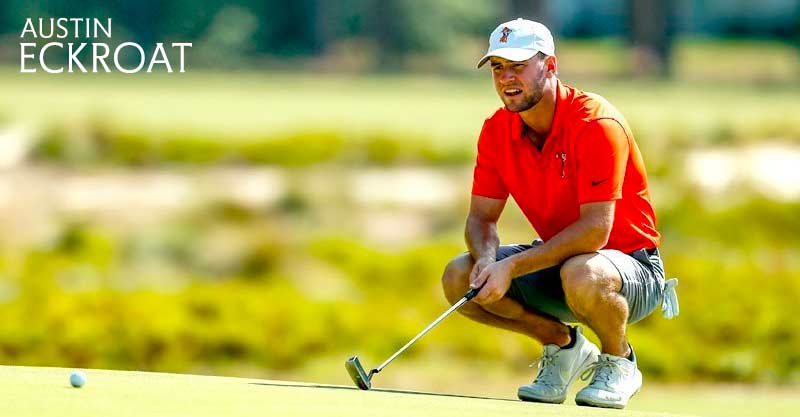 Austin Eckroat’s schedule was already bursting at the seams before the announcement this week that he had been named to represent the 10-man United States team in the Walker Cup, May 8-9 at Seminole Golf Club in Juno Beach, Fla.

As interruptions go, this one is welcome. The Walker Cup falls between the Big 12 Championship April 26-28 at Prairie Dunes in Hutchinson, Kan., and Oklahoma State’s hosting of an NCAA Regional May 16-19 at Karsten Creek in Stillwater.

Following that, the senior will be off to his final NCAA Championship May 28-June 2 at Grayhawk Golf Club in Scottsdale, Ariz., then immediately turn professional and try to take advantage of his No. 3 ranking on the PGA Tour University standings to play in Korn Ferry Tour events and earn either a full KFT status or PGA Tour status for 2022.

“I’ll be going about every week right through August,” the Edmond native said Thursday. “This is going to add another event into an already hectic schedule, but it’s going to be fun.

“It means a lot to play for your country and being a Walker Cup player has a nice ring to it.”

Eckroat and Quade Cummins of the University of Oklahoma were both announced this week as part of the U.S. team that will seek it’s third consecutive victory over 10 top amateurs from Great Britain and Ireland. Although they play for rival schools that both expect to be the last one standing in the NCAA Championship this spring, Cummins, a sixth-year senior from Weatherford, and Eckroat have grown into fast friends that play together frequently at Oak Tree National in Edmond, where both are members.

They got the call from the USGA while both were competing in the Seminole Intercollegiate in Tallahassee, Fla., two weeks back. Each was nervous about texting the other to see if they also got the good news. Cummins finally made the call to Eckroat and asked if he had listened to his voice mail.

“We were both pumped to get in,” Eckroat said. “The first three get in on points, outside of that it’s a pick. You think you have a good chance but it’s up to somebody else.”

As Eckroat spoke, Cummins was waiting for him to tee off in a practice round at OTN.  The two were together when Eckroat shot a course record 61 at Oak Tree National in early June and both have a great respect for the skills and determination of the other.

“It wouldn’t surprise me if we get paired together in at least one of the matches,” Eckroat said. “It’s a really cool opportunity and we will both be pulling really heavy for each other.”

In addition to the Walker Cup, Eckroat had another unique opportunity recently, serving as a player consultant on a design bid by young architect Colton Craig for renovation work at his first course, Kickingbird Golf Course in Edmond.

“That’s a course where I learned how to play golf,” Eckroat said. “I made my first birdie there, won my first tournament there. It would be really cool to be able to help out.”

Eckroat has spent much of the past few years watching the driven Matt Wolff, a former roommate at OSU who was also in the afternoon group at Oak Tree Thursday, and the carefree Viktor Hovland, with whom he now lives in Stillwater, both rocket to near the top of the PGA Tour. Hovland, currently one of the hottest players in the game,  has taught Eckroat how to relax your way to the top.

“I don’t know how he does it,” Eckroat said. “He’s just got an easy going lifestyle and he has learned how to live with no stress. He doesn’t worry about anything. But obviously he’s doing something right.”