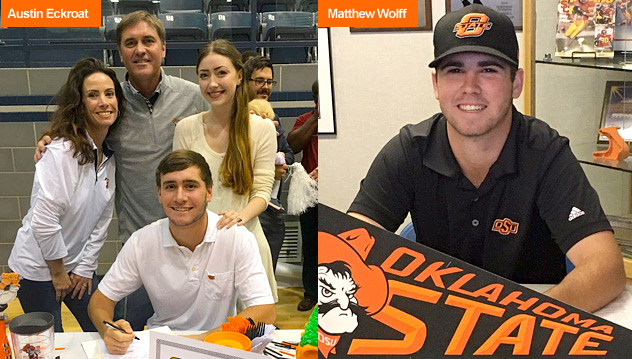 “I’m excited to announce we have one of the top recruiting classes again this year. Both Austin and Matthew have played at a high level for multiple years and have room to grow into a special tandem within our program,” Bratton said.

An AJGA Second-Team All-American in 2015 and 2016, Eckroat hails from Edmond North High School, which also produced current Cowboys Nick Heinen, Tyson Reeder and Hayden Wood. In 2014, Eckroat became the first freshman to claim the Oklahoma Class 6A individual crown, earning All-City Golfer of the Year honors from The Oklahoman in the process. He has been named an All-City selection on three occasions as well.

This past year, Eckroat won the prestigious Junior Invitational at Sage Valley Golf Club and was a member of the victorious United States squad at the Junior Golf World Cup in Japan. A member of the West Team at the Wyndham Cup, he also advanced to the round of 16 at the U.S. Junior Amateur.

In 2015, Eckroat captured the Scott Robertson Memorial title after firing a 16-under 197 total that included an 8-under 63.

“We always want the best player in Oklahoma and Austin is clearly that. I love the steady progress he has made each year from being the top junior in the state to becoming one of the best players in the nation,” Bratton said. “He’s a perfect fit for us on and off the course.”

A native of Aguora Hills, Calif., Wolff was named a first-team AJGA All-American in 2015. Like Eckroat, he was part of the victorious United States squad at the Junior Golf World Cup in Japan in addition to the triumphant West squad at the Wyndham Cup. Wolff also advanced to match play this past summer at the U.S. Amateur.

The Westlake High School product has a victory at the Toyota Tour Cup at The Alisal where he carded rounds of 66 and 61 as well. In 2015, Wolff qualified for match play at the U.S. Junior Amateur, advancing to the round of 16. Later that fall, he shared third place with Eckroat at The Ping Invitational at Karsten Creek.

Additionally, he advanced to the championship match in 2014 at the AJGA Polo Golf Junior Classic where he posted a runner-up finish.

“Matthew first got our attention with the low numbers he put up at a young age.  We have had success recruiting in Southern California over the years and Matthew joins Rickie Fowler and Hunter Mahan as the latest Southern California Cowboys. He possesses serious firepower and can really take it deep,” Bratton said.

“Austin and Matthew have developed a friendship with each other and our team through the recruiting process.  It’s always a bonus when that happens. These two understand what Cowboy Golf is all about and I can’t wait to get them on campus this fall!”