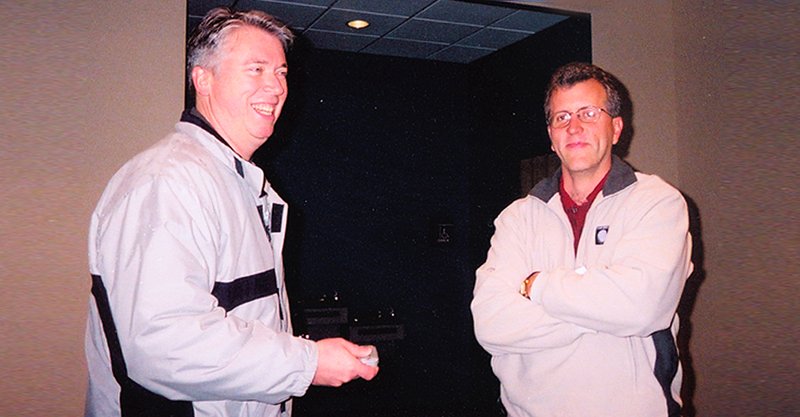 It’s a sad day here at Golf Oklahoma. My friend and former long-time co-worker Stephen Hillman passed away earlier this week at age 66 after a brief non-Covid related illness.

Stephen was the business editor at The Tulsa Tribune when I first met him in 1987 and he was a great editor, writer and very skilled graphic artist. After The Tribune closed in 1992 we went our separate ways but he was fortunately available a few years later when I was looking for a new partner.

For 10 years until 2006 Stephen did the layout and graphics for Golf Oklahoma and ran what was then a bustling pre-press and graphics operation. He also was instrumental in the forming and operations of the Four State Golf Expo in 2003.

Even after he left in 2006 to become the editor of the Tulsa Business Journal, Stephen would come back every winter to help us run the expos in Tulsa, Oklahoma City, Springdale, Little Rock and even one year in Omaha. They were a tremendous amount of work for a two or three-day event whose success was predicated largely on the whims of Mother Nature (if it was suddenly 60 out, golfers were golfing). But we had a tremendous time putting those on and he was instrumental in every one, from setup to tear down, and he led the late night poker games with our favorite exhibitors.

Stephen was highly intelligent, relentlessly positive and an incredible help to me. He taught me much outside of the office life as well, from gardening to music to drinks and food, as he was an expert bartender and mixologist as well.

It’s been a horrendous year for his son Derek, who also lost his sister tragically last April. Derek worked at the Expos as a teen and later replaced his father as our graphic artist before going into the restaurant business. We’re wishing you the best D and we love you.

So from all of us who worked with Stephen here or on the shows, including myself, Vicki Tramel, Pat McTigue, Craig Raguse, Whitney Miller, Tim Landes, Louise and Ned Schlosser, we wish the White Wizard, as my current partner Chris called him, Godspeed on his journey to the undying lands. We will miss you.

There is no service scheduled at this time, but Derek said there may be a get together this summer as the pandemic numbers continue to abate. – Ken MacLeod