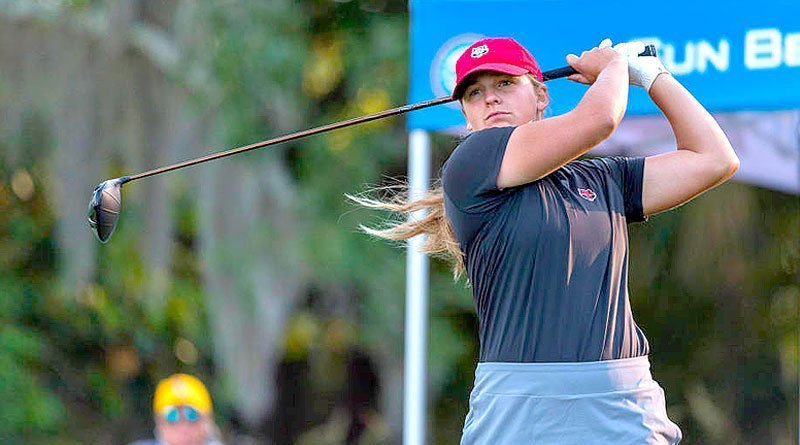 The Red Wolves ended the outing with their best three-round score ever at the league championships, which was also their best in any tournament since at least the 2000-01 season.  Their total included their second lowest single-round score of the season, a 294 for the second 18 holes.  The squad closed out competition today with a 296, while also posting a 299 for Monday’s opening round at the LPGA International.

“This team finish is one of the best three-day totals we’ve had in a while,” said A-State head coach MJ Desbiens Shaw.  “Our scores have become consistently lower through the year, and this was a great time to peak as a team. “

A-State finished just three strokes behind fourth-place Troy and within seven of third-place Georgia Southern.  South Alabama claimed the team title with a combined 877, while Texas State finished runner-up with an 880.

Atristain Vega earned all-tournament recognition after finishing sixth and posting a career-best 220, which included a career-tying 73 for both the first and third rounds.  She collected the second-best finish of her career in the process and now owns five top-25 finishes during her two-year career.

Schmidt also posted her second-best finish this season, placing tied for seventh with a season-low 221.  The freshman shot a 68 during the tournament’s second day to tie the second lowest single-round score in school history.  She began play with a 77 and ended with a 76 today.

“I couldn’t be more proud Maria and Olivia and their performance,” Desbiens Shaw said.  “Especially as underclassmen, they both handled the pressure of the final round in an exceptional way.  Our team had a great season, and I’m proud of everyone for winning the Sun Belt Academic Team GPA Award.”

Also finishing among the top-20 individuals for A-State, senior Beth Ann Compton placed tied for 18th with a 224.  She shot a 75 for each of the first two rounds before coming back to post a 74 today.  Junior Grayson Gladden shot a 227 to finish tied for 26th, and senior Aracelly Jimenez Rios recorded a 233 to place 39th.

Following the conclusion of the tournament, the Red Wolves were presented with the Sun Belt’s Team Academic Award for posting the highest GPA in the league.