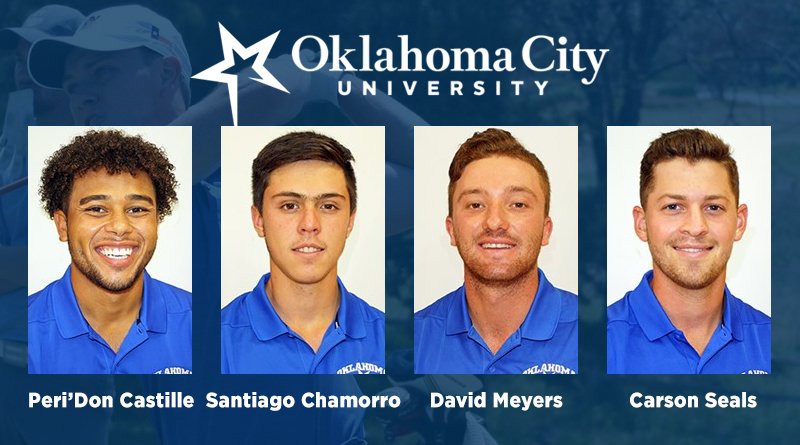 Meyers took first-team all-American acclaim, while Castille made the second team. Seals nabbed a third-team honor, and Chamorro picked up an honorable-mention nod.

Meyers, a senior from Johannesburg, South Africa, produced top-five finishes in all five tournaments he golfed in this season with two second-place finishes. Meyers posted 71.44 strokes per round with three eagles and 64 birdies. Meyers’ low round of 63 happened in the U.C. Ferguson Classic on Sept. 3 at Lincoln Park Golf Course in Oklahoma City for one of his 21 career rounds in the 60s.

In his career, Meyers ranks second in OCU history in career stroke average (72.03) with five wins. Meyers became the SAC player of the year, three-time all-region and two-time all-conference.

Castille, a senior from Dallas, wrapped up his third all-region accolade and second all-SAC nod. Castille accumulated 72.57 shots per 18 holes, 54 birdies and his first career win in the Ottawa-Arizona Spring Invitational on Jan. 27-28 in Litchfield Park, Ariz., in 2019-20. He nailed down three top-five finishes, a runner-up finish and his low round of 67 in the U.C. Ferguson Classic. Castille has provided the Stars with a 74.06 stroke average during his career.

Chamorro, a freshman from Bogota, Colombia, put together a 72.86 scoring average with 47 birdies this season. Chamorro picked up three top-10 finishes in five starts along with his first career win March 9-10 in the Oklahoma Wesleyan Eagle Classic in Bartlesville, Okla., as well as SAC player of the week.