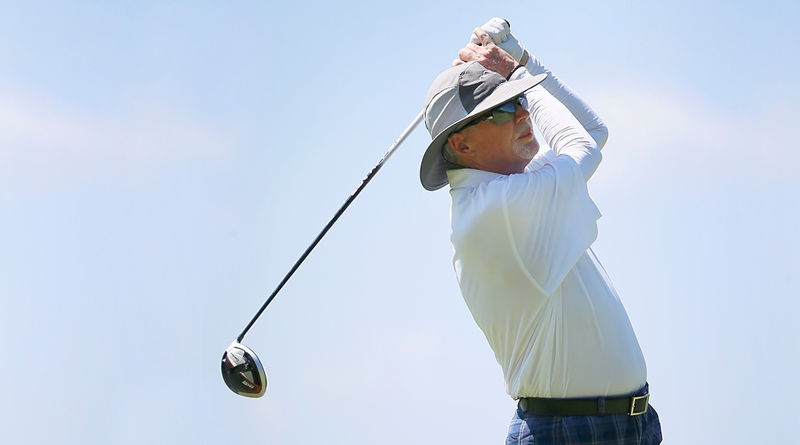 Brad Simons, an assistant professional at the Country Club of Little Rock, won his first South Central Section PGA Professional Championship Tuesday at The Patriot in Owasso, shooting a second-round of even-par 72 to finish at 7-under 137. Simons shot the tournament’s low round of -7-under 65 Monday.

The top five finishers in the section event, which was sponsored by Justice Golf Car and Titleist/Footjoy, will advance to the national PGA Professional Championship next April at Barton Creek Resort near Austin. The top 20 club professionals at the national will earn spots in the 2020 PGA Championship May 14-17 at Harding Park in San Francisco.

Also earning spots in the national event were four Oklahoma pros. Shannon Friday of Oklahoma City Golf & Country Club finished second at 5-under after closing with a 69. Tim Fleming, the director of golf at OKC Golf & CC, tied for third at 4-under with Blake Bowman of Yamaha Golf Cars at 4-under. Jeff Combe, director of golf at Tulsa Country Club, shot 71-70 to finish at 3-under 141. Jarod Lundy of Winter Creek, who reached 6-under on Tuesday’s round with four holes to play, had a couple of closing bogeys to shoot 4-under 68, which matched Bruce Baxley for best round of the day. Lundy, Jason Hase of Buffalo Dunes in Garden City, Kan., Brent Wilcoxen of South Lakes GC in Jenks and Kyley Tetley of The Club at Indian Springs in Broken Arrow are the alternates.

While congratulations were certainly in order for all of the above-mentioned golfers, the story of the day was the man who finished tied for 20th.

Mark Fuller, director of golf at The Club at Surrey Hills in Yukon, returned to competitive golf five months after being diagnosed in late January with a gastrointestinal stromal tumor (GIST) on his liver. The cancer was eating away at his right hip bone, which required an eight-inch nail to secure the hip to his femur. He underwent chemotherapy and radiation to reduce the tumor, which had caused massive swelling in his feet, legs and other sensitive areas.

The surgery to repair the hip led to blood clot in his lung. Fuller was treated both in Oklahoma City and at the M.D. Anderson Cancer Treatment Center in Houston. During recovery, he read the story of Oklahoma State fan Joe Tippens, who used a canine dewormer medicine called Panacur C to help him stage a remarkable recovery from small cell lung cancer when doctors had expected him to live for no more than a few months.

Fuller started taking the dewormer in February and is a firm believer that the dog medicine combined with his treatments has resulted in his own remarkable recovery. He was able to return to work this spring on a five-to-six hour per day basis and in the last few weeks began practicing lightly.

“I really believe it’s helped,” he said. “I take it five times a week and I’ll be taking it the rest of my life.”

Long one of the top golfers in the section, he shot a 1-over 73 in his first round back with 17 pars and one bogey. Tuesday he closed with a 76. Fuller was limping noticeably as the hip continues to heal and said he has had to recalibrate which clubs to hit from particular distances, but otherwise was thrilled to be back playing.

“It’s been a long five or six months,” he said. “Luckily my sister (Carrie) has been right by my side through every appointment and hospital visit. My three kids have been great (son Austen, 26, daughter Courtney, 23, and son Brice, 18). I’ve had a lot of prayers and a lot of friends have reached out. A lot of my PGA buddies have been very supportive.

“I feel good. I feel like I’m getting stronger every day.”

His fellow PGA pros were all surprised and thrilled to see Fuller back in action this week.

“It’s terrific for him to be back,” Fleming said. “I’m very happy for him and the progress he’s made in his recovery. It’s great just to get to see all his friends, because we don’t get to that often when we’re doing our daily jobs.”

Austen Fuller is an assistant pro at Tulsa Country Club and has kept Combe informed on his father’s progress.

“It was great to see him out here and hopefully he’s just going to keep getting stronger and recover fully,” Combe said.

Fuller’s children founded a GoFundMe page to help with his expenses. You can view the page or help here.

Note: Vince Bizik of Grove made a hole-in-one on the par-3 ninth hole, his final hole of the second round. Asked how many aces he now had in his career, Bizik said he couldn’t remember, around his 13th or 14th.