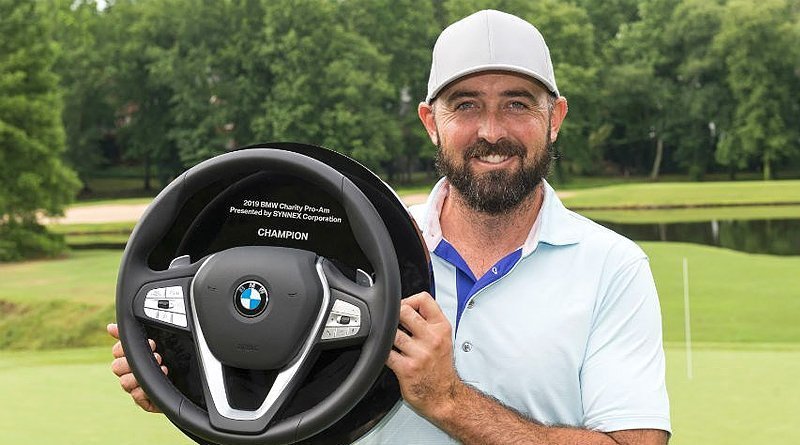 GREENVILLE, S.C. (June 9, 2019) – Rhein Gibson is headed back to the PGA Tour, courtesy of perhaps the biggest win of his professional golf career.

The Oklahoma Christian Athletic Hall of Famer and Oak Tree National member, after three runner-up and three third-place career finishes on the Web.com Tour, broke through with his first win Sunday, firing a bogey-free 8-under-par 63 at Thornblade Club to close the BMW Charity Pro-Am presented by SYNNEX Corporation.

By winning the tournament, which was shortened to 54 holes due to inclement weather throughout the week, Gibson earned 500 points in the Web.com Tour scoring system, securing his spot on the PGA Tour for the 2019-20 season.

The top 25 finishers in the Web.com Tour’s regular-season scoring system earn PGA Tour cards and Gibson shot up 25 spots to No. 7 with the win. He now has 893 points this season along with earnings of $213,669, including $126,000 for the win. That ranks fourth on the Web.com Tour’s money list.

“I wasn’t sure we’d get 54 holes in, but I wanted to go out there with the clean mindset that we’d get 54 in. I tried to keep the pedal down and try and make as many birdies as I can. Fortunately, I was able to win by three strokes. It sets me up for another stint on the PGA Tour so I’m excited.”

The BMW Charity Pro-Am is one of the more unique events on the Web.com Tour’s schedule. It was hosted on two courses, Thornblade Club and The Cliffs Valley, for the first two rounds before moving to Thornblade Club for the final round. The event pairs a pro with an amateur for the first 36 holes before cuts are made for both amateurs and professionals.

Gibson started the final round two shots out of the lead, but had three birdies and an eagle (on the par-5 No. 5) on the front nine, then birdied No. 10, No. 15 and No. 16 to get to 21-under 193 for the tournament. He won by three shots over Michael Miller, with three players – Brian Campbell, Jonathan Randolph and Kristoffer Ventura – tied for third at 16-under.

Gibson was coming off a fourth-place finish in the REX Hospital Open at The Country Club at Wakefield Plantation in Raleigh, N.C., and felt like he had positive momentum heading into the South Carolina event.

“I’ve definitely put myself in some opportunities before to win, but it just didn’t go my way on Sunday,” Gibson said. “It was good to get in the hunt again and actually close it out with a bogey-free round. If someone shot 9 (under) and beat me, I’d still be pretty happy with 8 (under).”

Gibson holds the world record (recognized by the Guinness Book of World Records) for the lowest official round of golf ever recorded with a 16-under 55 he shot in May 2012 at River Oaks Golf Club in Oklahoma City.

“Shooting 55 was very sweet, don’t get me wrong, but I don’t want to be known for it,” Gibson said. “It’s great to validate that with a good win today, especially on television. I know what I’ve been doing is correct, I’m really happy to see it pay off.”

“I’m extremely proud of the golf Rhein played this week,” said David Lynn, OC’s athletic director and men’s golf coach. “I know how hard he has been working to put everything together. It’s the toughest job in the world and the ups and downs are brutal. I know he will really enjoy this win. I look forward to watching him play next year on the PGA Tour.”