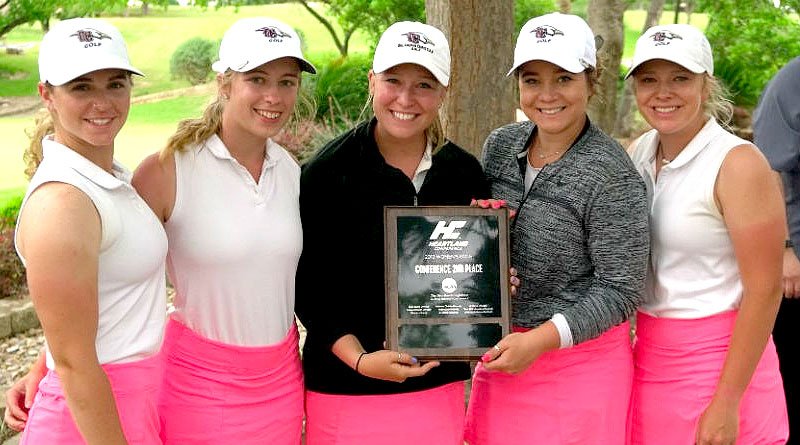 Goad closed the Heartland Conference Championship with a 1-under-par 71 at Slick Rock Golf Course to secure a second-place individual finish – the highest ever for an OC player in the event – and she and Kate Goodwin lifted the 18th-ranked Eagles to a second-place team finish, behind only No. 2 Dallas Baptist (Texas).

The success the Eagles had in a league tournament that included four top-25 teams figures to provide a huge boost in both momentum and confidence as they head into the Division II West Super Regional in three weeks at Amarillo Country Club in Amarillo, Texas.

The second-place finish was OC’s highest official finish in a Heartland Conference tournament, although the Eagles won an unofficial league title in 2015, when the conference refused to count OC’s team score while the university was in the Division II membership process.

Goad, a sophomore from Wheeler, Texas, played perhaps her three finest rounds of the season this week in the Heartland event, opening with a 72 and following that with a pair of 71s to finish at 2-under 214, just two shots behind DBU star Ann Parmerter, one of Division II’s best players, and four shots clear of two players who tied for third in the 43-woman field.

On Tuesday, faced with the pressure of contending for a league title, Goad didn’t blink, recording five birdies, including one on her final hole, the par-4 No. 9. Her second-place finish was the highest of her collegiate career, and her 2-under score for 54 holes ranked second in OC program history and earned her a spot on the all-tournament team.

Goodwin, a senior from Tulsa, opened her round with three birdies and held on to shoot 72 on the 5,943-yard course for a three-day score of 220 (4-over), good for sixth place.

Junior Abigail Rigsby of Courtenay, British Columbia, had three birdies en route to a 77, while senior Elizabeth Freeman of Edmond also shot 77 and finished 17th at 230. Sophomore Felicity Wittenberg of West Pymble, Australia, had a highlight with an eagle on the par-5 No. 12 hole. She shot an 84 on Tuesday and was 39th at 239.