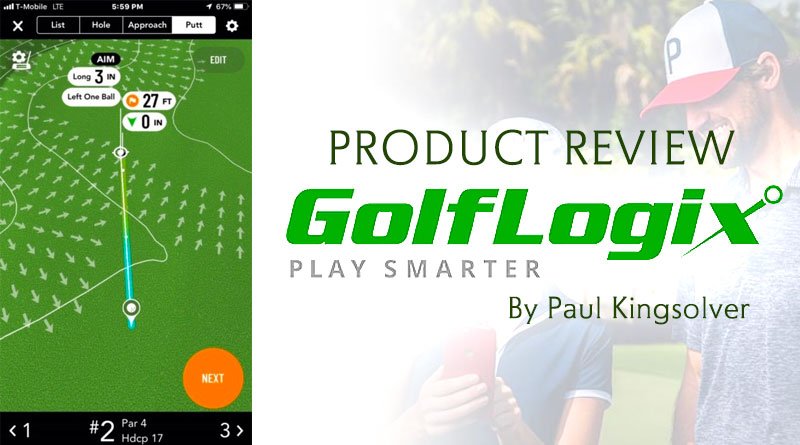 The GolfLogix + Putt Line App for iPhone and Apple Watch is a stable and useful platform for keeping score, tracking shots and determining yardage. The watch implementation is superb and may represent the first successful attempt to enable a user the ability to keep track of the round without reaching for the phone. Doing so, however, will prevent you from using some nice features that you can only use on the phone. These features include “Putt Line,” which puts green maps on your phone and even promises to give you a preview of your putt once you line it up on the green. This feature has limits, as explained later. The app is free to try for two rounds and then either $10/mo. or $50/yr. Most courses are available and you can submit requests for new courses. The courses are apparently not uploaded to the phone’s permanent storage as there is about a minute delay to load the course into memory for each use. After the course is selected, you will see the main course interface as seen below.

In this interface, an overview of the hole selected is presented with suggested shots to the middle of the green. Tapping on the green enables a larger green view so you can select a pin location, which changes the yardage accordingly. Tapping a place on a specific hole in “Hole” mode gives you the yardage to a specific place, a creek for instance. Approach mode gives a 3D elevation to the green and “Putt” mode will give you the Putt Line feature. However, currently the number of courses that don’t have their green’s mapped is in the majority. That will probably change soon.

As with all GPS golf apps, I strongly recommend that you attempt to generally verify any yardage reading, such as 150-yard stakes, sprinkler head markers or, best of all, a fellow golfer with a laser. However, I estimate that the GPS yardage is accurate more than 90 percent of the time with this app, which is good enough with verification efforts. Scoring a round on the phone has always been a great function, as the golf apps will almost all email you the scorecard and statistics for each round, which makes keeping your handicap and track of your rounds that much easier. With the Apple watch, scoring is extremely simple and reliable. The scoring is intuitive — a simple tap and you are asked for the score on a specific hole, number of putts, whether you hit the fairway (or push, pull, hook or slice), then onto the next hole. You can also add club, and other information in the phone. However, since the watch interface also gives front, middle and back yardage, not reaching for the phone each hole became a pleasure.  This is the first Apple Watch golf GPS app I have tried that successfully implements stable and reliable functionality. But if you leave your phone in the bag, you will be depriving yourself of having a green map for determining slope and elevation for both approach shots and the green. GolfLogix goes further and has added the ability to draw a line on the green map between spot and hole and then have the app tell you which line will work. You are on your own with pace, but this is a cool feature to use if your golfing partners don’t start giving you a hard time for looking at your phone instead of playing golf. You are also at the mercy of sunny skies and glare. We might have to wait for the type of image that Matt Damon conjured up on the climactic greenside scene in The Legend of Bagger Vance, but this is certainly a solid step toward that reality.

Your phone will suffer about 40 percent battery drain for a typical round. The watch will lose about 25 percent.

If you own an Apple Watch, get this app and pay the money. It is too convenient to score a round and get basic yardage not to buy. If you do, you still might pull out the phone to see what yardage clears a fairway bunker and to see where the trouble is. The app also should be especially useful on new courses. The green maps are useful and could be studied while walking or riding to the next hole, especially with the approach view. On the green, the usefulness may be outweighed by the sheer rudeness of having your phone out all the time. Putt Line might change that if everyone starts doing it, God forbid.