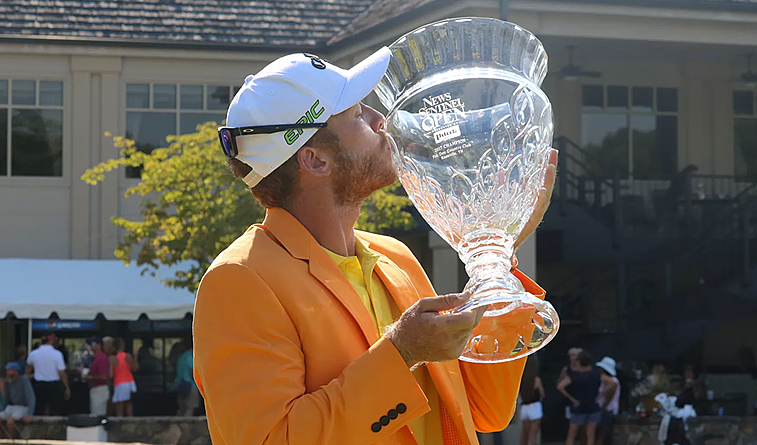 KNOXVILLE, Tenn. – Talor Gooch came from five shots back to win the News Sentinel Open presented by Pilot by one shot with a final-round, 6-under 65 on Sunday. The 25-year-old from Midwest City’s first career Web.com Tour victory locks up his PGA TOUR card for the 2017-18 season and moves him to No. 3 on the Regular Season money list.

“It’s everything you’ve ever dreamed about,” Gooch said. “This is as much about my family, my friends, (caddie) Kelsey (Cline), my coach and so many people along the way that have helped. This is a culmination of everything right now.”

Gooch’s 18-under 266 edged out Jonathan Hodge by one shot after Hodge’s chip from the greenside rough to force a playoff at the last came up just short.

“That chip on 18 was in the really thick rough, but it was a decent lie and a decent chance and had a shot,” Hodge said. “I would have liked it to hit it harder, but I can’t complain. I’m super happy with how I played all week.”

Gooch trailed Hodge, who was playing in the group behind him, by two with five holes to play. But he rolled in a 6-foot birdie at the 14th to tie up the lead after Hodge three-putted the 13th. His first solo lead of the tournament, which he would never relinquish, came at the par-4 15th, where he hit it to 5 feet and rolled it in. It was that type of ball-striking day, hitting 17 of 18 greens in the final round.

“It was a really easy round, to be honest,” Gooch said. “The toughest part of the day was I had about a 50-footer on the par-3 16th, and I left it about 6 feet short for par, but outside of that everything was pretty close and pretty easy. That’s the type of round you wish you could have a lot more often.”

Entering the 72nd hole with a one-shot lead, Gooch looked at a scoreboard for the first time and saw he had a one-shot lead to protect, and he went the safe route, hitting it to the middle of the green and two-putting to force Hodge to birdie the last.

“When I was walking down 18, I told (my caddie) I know we’re going to be in it,” Gooch said. “I saw where I was, and it was a tough pin. I told myself, ‘If I have a good number, I’ll try to knock it close, and if not hit it to the middle of the green and make him make birdie.’ Thankfully it worked out.”

The journey to get to the winner’s circle wasn’t quite as smooth. Gooch played the Mackenzie Tour – PGA TOUR Canada a year ago, where he posted four top-10s in 12 starts for a 15th-place finish on the Order of Merit. At Second Stage of last year’s Web.com Tour Qualifying Tournament, where he looked like he wouldn’t advance until a stellar third round, the former Oklahoma State Cowboy pondered whether he was going to have to get a part-time job and whether he’d have enough money in his account to continue making a run at being a professional. Nine months later, he is a Web.com Tour winner and heading to the PGA TOUR after a runner-up and victory in back-to-back starts.

“From the beginning of the year, not having much money in the account and needing to play well early to now, I think I can go have a nice dinner,” Gooch said. “It’s quite the opposite ends of the spectrum. It’s been a crazy year.”

Gooch credits people like Cline, who has been Gooch’s mentor since he was 10 and caddied for him this week, for getting him here. Cline was the one keeping him calm down the stretch and preaching the same message of patience that he’s preached for the last 15 years.

It was unusual circumstances that placed Cline in Knoxville in the first place. Gooch’s usual caddie had a death in the family, and so Cline filled in. When Hodge’s chip to force a playoff at the last came up just short, Gooch and Cline embraced on the putting green for 30 seconds, the emotion of 15 years of work together pouring out.

“He’s been there for me since I was 10 years old, and it’s been a lot of hard work and sacrifice from him to come and take time with me over the years,” Gooch said. “He caddied for me in all the U.S. Amateurs that I played in, and he hasn’t gotten to caddie for me as a professional until now. I’m as happy for him as I am for myself that he was here for that.”

Looper, who entered the day with a four-shot lead, came back to the pack immediately after losing his tee shot out of bounds at the first on the way to a triple bogey.

“It just went out of bounds. I cut it too far,” Looper said.

By the time Looper hit the fifth tee, he was already trailing after Hodge made birdies on four of his first five holes.

“It was a dream start. I think I one-putted like the first six or seven holes,” Hodge said. “I didn’t know where I was, but I had a good guess because of how well I started. I made a point of not looking at boards for my own sake.”

Despite a disastrous start for Looper, he fought back to tie Hodge at the top again with birdies at No. 5 and 6, but two bogeys and two birdies over his last 12 holes weren’t enough to get it done.

Still, the 28-year-old leaves with a career-best T3 finish and a jump up to No. 79 on the money list. That gives him a reasonable shot of jumping into the top 75 on the Regular Season money list and securing full Web.com Tour status for 2018 at next week’s Regular Season finale in Portland.

“It’s my best finish ever, but I’m still bummed,” Looper said. “With the way I started, it wasn’t the way I hoped. If I don’t start the way I do, I’m there all day and I can push forward. But my putter was ice cold today, and I couldn’t get anything to go in.”

Looper and Keith Mitchell both tied for third at 16-under 268. Rob Oppenheim and Brice Garnett tied for the round of the day (6-under 65) to finish tied for fifth.