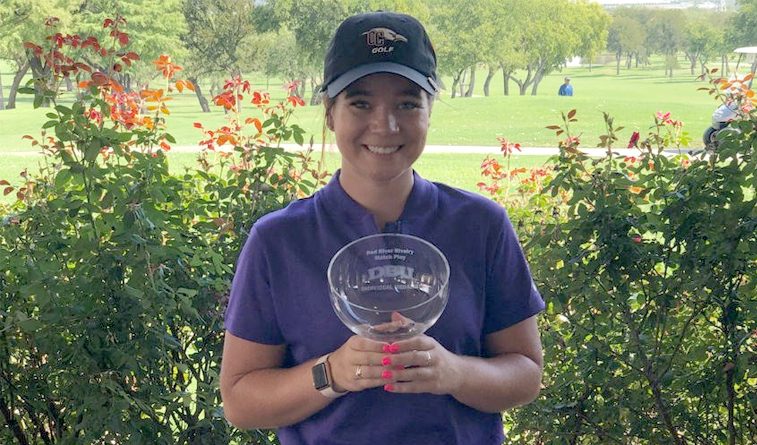 GRAND PRAIRIE, Texas (Sept. 25, 2018) – Kate Goodwin’s months-long run of success on the golf course shows no signs of slowing down, which is good news for both her and her Oklahoma Christian team.

The senior from Tulsa shot a 2-under-par 70 on Tuesday at Prairie Lakes Golf Course in the final round of the Dallas Baptist Match Play Invitational to win the individual portion of the tournament. It was Goodwin’s fourth collegiate win – one during each academic year, so far.

The tournament is emulated to be the same as the NCAA Division II National Championships, which will be played this next May.

Against the Lady Eagles in match play, Armon, Hernandez, and Lumpkin all won.

Dallas Baptist took championship honors in match play, 4-1, over St. Mary’s, and finished with an 858 in medal play.  The Patriots finished 21 strokes ahead of West Texas A&M.   The RiverHawks will return to action this upcoming Monday and Tuesday (Oct. 1-2) to play in the Broncho Invitational in Edmond.

OC coach Greg Lynn did not mince words when discussing what Goodwin has accomplished since May, when she seemingly came out of nowhere to win the NCAA Division II West Super Regional title. Since then, she has won three summer amateur tournaments, reached the Oklahoma State Amateur semifinals, moved into the World Amateur Golf Ranking and now has another collegiate win in a tournament that featured most of the Heartland Conference’s top players.

“She has now established herself as the No. 1 player in the Heartland Conference,” Lynn said.

Goodwin, who shot rounds of 70 and 69 on Monday, finished the tournament at 7-under 209, two shots better than one of two former Heartland player-of-the-year winners on the DBU roster, Ann Parmerter. The other, Evelyn Arguelles, was in third, five shots behind Goodwin.

The individual win was the 17th by an OC golfer in the program’s eight-season history and Goodwin now ranks second in wins on the OC all-time list, trailing only former teammate Anna Arrese Cortadellas, who won eight times.

Goodwin’s 7-under score obliterated Arrese Cortadellas’ former program record for low 54-hole score of even par, set in the Susie Maxwell Berning Classic in September 2013 at Lincoln Park Golf Club’s West Course in Oklahoma City. Goodwin also set the OC mark for low 36-hole score on Monday at 5-under, one shot better than she shot in the 2016 Oklahoma Intercollegiate tournament at Fort Sill Golf Course.

In the Heartland record book, Goodwin’s 54-hole score ranks second all-time, behind only a 15-under 201 posted by Parmerter two seasons ago, and her 36-hole score (139) tied for third-best in league history.

Goodwin was the only OC player to win her individual match in the Lady Eagles’ three team matches during the DBU tournament. In the fifth-place team match on Tuesday, she beat Northeastern State’s Nina Lee, who shot a 78. OC sophomore Abigail Rigsby (77) downed Ebba Moberg (78) to give the Lady Eagles another point.

The match-play tournament was the first in the program’s history.

The Lady Eagles next will play in the West Texas A&M Fall Invitational, set for next Monday and Tuesday at Tascosa Golf Club in Amarillo, Texas.

The Bulldogs competed against four nationally-ranked teams in the tournament, finishing only behind #3 Dallas Baptist and #9 West Texas A&M. They would tie with #12 St. Mary’s and place ahead of #18 St. Edwards along with in-state foes Central Oklahoma, Oklahoma Christian and Northeastern State.

Gloria Choi was the top scorer for the Bulldogs, shooting an even-par 72 in the final round to finish the tournament tied for ninth. Veronika de Bochdanovits followed Choi with a final round of 71 to place 11th, while Chloe Thackeray would fire a final-round 75 to place her one spot behind in 12th. Elin Wahlin and Mikaela Rindermann would wrap up the scoring as Wahlin turned in a final round 75 and Rindermann shot an 81.

The Bulldogs will return to the course on October 1-2 at the UCO Classic in Edmond.