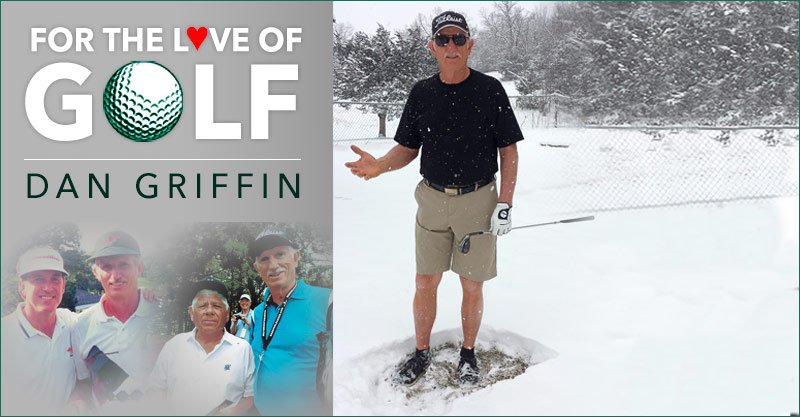 Half a century after he caddied Donna Caponi to victory in the 1970 U.S. Women’s Open at Muskogee Country Club, you can still at times find Dan Griffin double-bagging  a loop at Southern Hills, and doing it twice in a day.

Are you kidding me? Walking Southern Hills once in a day is hard enough with a caddie. Carrying two bags and doing it twice at age 72, wow!

“Dan is just remarkable,” said Cary Cozby, director of golf at Southern Hills. “When I introduce him to a group, I’ll tell them he was here to open the car door for Perry Maxwell when he came to design the course in the 1930s. He’s out there carrying two bags twice in 100 degree weather and is still walking 50 yards ahead of the group on the last hole.

“He’s just an awesome guy and a joy to be around. A true gentleman who just loves the game.”

Grif, as everyone calls him, is one of our Oklahoma treasures we’ll be spotlighting in a For the Love of Golf series throughout 2021. Look for more stories of that nature in our first issue of the new year coming out in late January.

When he’s not on the bag, Griffin runs 200 head of cattle on his farm north of Skiatook, doing most of the ranching work himself but also helped by his son-in-law and other cowboys when needed. He started caddying at age 11 in 1959 and loved the craft of helping others, though a fine player himself.

In 1970 when the U.S. Women’s Open came to what is now called Muskogee Golf Club, the pros were not allowed to bring their caddies to major championships but had to use local caddies. He drew Caponi’s name, helped her navigate the tricky Perry Maxwell layout and a week later she was a major champion.

“We hit it off really good, she played well and won,” Griffin said. “I had went down earlier and walked the course, got all my yardages and was prepared. I heard her talking after the first day to a couple of tour caddies who were hanging around, and she told them she didn’t get a “hot dogger,” which meant she got someone who knew what he was doing.

“She led wire to wire and is probably the nicest person I’ve ever caddied for. She lives in Tampa Bay now and we still talk occasionally.”

Encouraged by that event, Griffin went on to try the caddie’s life on the PGA Tour. Although he had some success with players such as Dale Douglass, Jim Simons, Bruce Devlin and others, he did not catch on as a regular with anyone who got on a roll and the money wasn’t great. He did have memorable events with Charlie Sifford, Gil Morgan (Trans-Miss at Southern Hills)  and George Burns.

“Charlie Sifford would hit a few 2-iron shots and say he was ready,” Griffin said. “I’d ask him if wanted to hit a few drives, and he would say, ‘son, if I can hit this 2-iron, I can hit anything’ “

Returning to the Tulsa area, Griffin started a company out of his house that sold auto body repair products and grew the company until it had over 220 products, a 12,000 square foot warehouse and satellite stores in Springdale, Ark., and Guthrie. He solid it in 2002, started a tree service and returned to caddying at Southern Hills and The Patriot in 2008.

The most memorable was carrying for Lee Trevino in 1970.

“Lee was nice and played to the crowds,” Griffin said. “He and I hit it off really well. He asked me yardages, I helped him read greens, the whole thing.”

Trevino however did not play well in the second round, shooting a 77. He followed that with another 77 in the third round, after which Griffin said he asked Trevino if he was just essentially going to mail it in.

“He looked a me and said “I’m not quitting,” Griffin said. “He shot a 65 in the final round which at that time tied the course record.”

Griffin is ready and willing if anyone is in need of a caddy who knows the Southern Hills layout intimately and can read the greens even after the restoration by Gil Hanse.  Most of the players who will compete next May in the Senior PGA Championship will have their own caddies, but who knows?

“I just love the game,” said Griffin, who is also an enthusiastic and solid player. “I love playing but caddying is something I’ve always loved to do. I like watching people play and helping them in a tournament has always been a big time thrill.

“I’m ready if anyone needs me.”