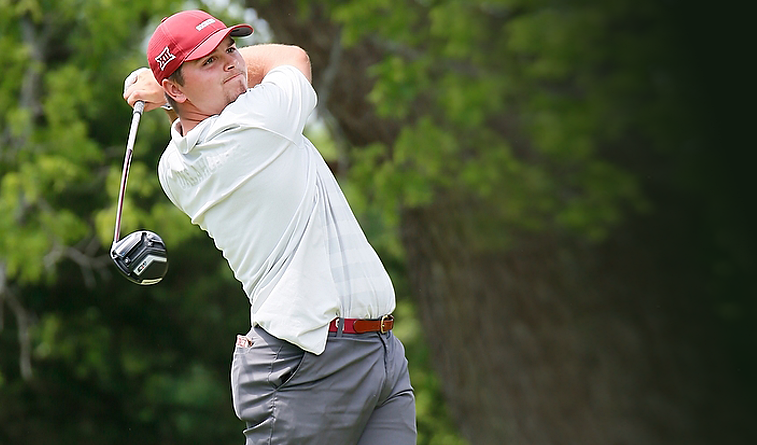 NORMAN – The No. 4 Oklahoma men’s golf team is in first place after the opening round of the NCAA Norman Regional on Monday. The three-day, 54-hole tournament is taking place at the Jimmie Austin OU Golf Club.

Playing on their home course, the Sooners recorded a 283 (-5) during Monday’s first round and finished as the only team under par through 18 holes. Auburn, Arkansas and North Florida are all tied for second place at even-par 288, while San Diego State is in fifth at 290 (+2).

“It’s nice to be leading,” OU head coach Ryan Hybl said. “We’re on our home golf course and there’s a lot of comfortability out here for us. Hopefully we can keep on moving down that same path and have a really solid round tomorrow. “It’s awesome to see everyone come out. Great fan support already on a Monday. I’m excited for the guys to play in front of crowds. Overall, we did a nice job today.”

Junior Blaine Hale was the first player on the course Monday morning and posted the lowest individual round of the day at 67 (-5), tying his best for score of the spring season. Hale earned five birdies during his bogey-free round on Monday. The junior started strong with four birdies on the front nine to provide the Sooners with early momentum.

“On Thursday night, Coach Hybl called me and said that they were going to have me as the No. 5 spot,” Hale said. “They know I like to get out there early. There is just something about it that I like getting out there early. I have a fresh golf course and no one in front of me. That’s why I like it. I don’t know I don’t have to wait on anyone.”

Redshirt sophomore Quade Cummins is tied for second place at 69 (-3), two shots back of the individual lead. Cummins earned his eight round in the 60s this season, finishing with five birdies over his last 11 holes.

Sophomore Garett Reband finished with even-par 72, making par on each hole during the opening round. Reband is tied for 16th place.

The Sooners were on top even though two of their better players – senior Grant Hirschman and junior Brad Dalke – each struggled to a 75. Hybl said he expected better finishes from both in Tuesday’s second round.

Tuesday’s second round will begin at 7:30 a.m. CT on hole no. 1. OU will be paired with Auburn and Arkansas.

Live scoring will be available on GolfStat.com<http://golfstat.com/