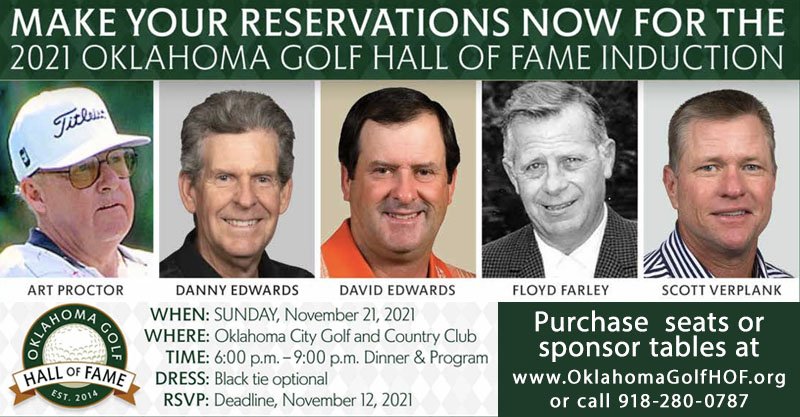 One of the most decorated Oklahoma golfers of all time, Scott Verplank highlights an incredible lineup of inductees for the 2021 Oklahoma Golf Hall of Fame ceremony. Tickets and table are now available for this special evening Nov. 21 at Oklahoma City Golf & Country Club.

Verplank, who overcame diabetes to have one of the greatest amateur careers of all time before registering five PGA Tour victories, is in a class that includes brothers Danny and David Edwards, each of whom rose to collegiate glory at Oklahoma State before successful PGA Tour careers, Art Proctor, who started a junior golf dynasty in Edmond among his many accomplishments, and architect Floyd Farley, the undisputed champion of fun, fast and challenging public golf in Oklahoma.

Tickets and sponsorship tables for the dinner can be purchased at www.oklahomagolfhof.org.  Or call 918-280-0787 or email ken@golfoklahoma.org with any questions.

This is the fifth induction class since the Hall of Fame merged with the previously existing Oklahoma Women’s Golf Hall of Fame. Bios, induction videos and acceptance speeches for previous inductees can also be accessed on the website.

One of the most decorated amateur golfers in history, Scott Verplank also had early success on the PGA Tour, winning the 1985 Western Open before winning the NCAA Championship, which he did for Oklahoma State in 1986.

A Type 1 diabetic, Verplank long played with an insulin pump to control his blood sugar level. He has battled numerous other wrist, elbow and shoulder injuries and lost the entire 1997 season after elbow surgery in 1996.

Verplank was a mainstay of the “Oak Tree Gang” playing out of Oak Tree National in Edmond. He still plays on the Champions Tour but is also beginning a broadcasting career and has a contract with CBS Sports.

When the Edwards family first moved from Wichita Falls to Edmond, Kickingbird had yet to open. Danny hit balls in a field, and often secretively, on the still growing-in course while no one was watching. A gifted athlete who quickly became proficient in any sport he attempted, Edwards learned the game well enough to win the state championship for Edmond and earn a scholarship to Oklahoma State.

In addition to the victories at OSU, Danny’s amateur career included being a member of the 1973 Walker Cup Team. He was low amateur the same summer at The Open Championship. He won the 1972 North and South Amateur and the 1972 Southeastern Amateur.

Although he played briefly on the Champions Tour, Danny was consumed with other opportunities. He was an original founder of Royal Grip, later successfully sold to investors. He became a highly proficient professional auto racer and was heavily involved with divot repair company (Green Fix Golf). He has recorded a series of videos teaching proper chipping methods. Danny was also one of the original members and acting president of the Tournament Players Association in the late 1990s that tried to force the PGA Tour into greater transparency with its finances, a battle that still goes on today.

David Edwards climbed to the top of the collegiate and professional golf circuits with a tremendous work ethic, an inquisitive and intelligent mind and more athletic ability than many suspected.

“David was one of the most driven players we’ve ever had at Oklahoma State,” said former teammate Tom Jones, who helped recruit Edwards to Stillwater. “He was not the best player when he got here but he was when he left.”

„I underevalued him on the front end but boy did he make a believer out of me,” said former OSU coach Mike Holder. ‘No one improved more during his college years than David Edwards.”

Edwards was one of the original range rats for fellow 2021 inductee Art Proctor at Kickingbird Golf Course in Edmond. He entered Oklahoma State in 1974, where he averaged 77.6 shots per round as a freshman, lowering that to 71.8 as a senior when he won two events, finished second or third in five others and capped off his dominating year by winning the 1978 NCAA Individual Championship and leading the Cowboys to the team championship.

He didn’t take long as a professional to break into the win column, claiming the 1980 Walt Disney World National Team Championship with brother Danny, then winning the 1984 Los Angeles Open, the 1992 Memorial Tournament and the 1993 MCI Heritage Golf Classic. He also won the 2006 3M Championship on the Champions Tour and was a two-time winner of the Oklahoma Open (1994 and 1996).

Whether making an appearance at a youth tournament, a golf expo or a charity function, David has always been generous with his time to give back to the game in Oklahoma.

Farley escorted A.W Tillinghast on his visit to Oklahoma, a trip that resulted in designs for Tulsa Country Club and The Oaks. He also credited Perry Maxwell and William Bell as influences. After returning from a stint in World War II, in 1941, Farley designed and built now-defunct Meridian Golf Club in Oklahoma City. He owned that course until 1961.

“Art’s impact on the Oklahoma Open championship was transformative and long-lasting,” McGraw said. “He took a dying event and turned it into one of the best State Open’s in the country.”

Proctor left Kickingbird to build a 45-hole golf complex near Arcadia, but he ended up losing his investors in the oil collapse of 1987. He then took a post running the Oklahoma State Parks golf courses, and made many significant improvements, including designing nine holes at Lake Murray, nine holes at Quartz Mountain and nine holes at Cedar Creek in Broken Bow.

He has also played in 14 national club professional championships with a top finish of third place.

In 1984 at the age of 44, Proctor set a then Guinness Book of Records mark by playing 414 holes of golf in one day. He teed off at Kickingbird in Edmond at 5:46 a.m. and finished his 23rd round of golf at 8:51 p.m., averaging about two minutes per hole. The amazing thing, other than endurance, was that he shot 6-under-par for the day.