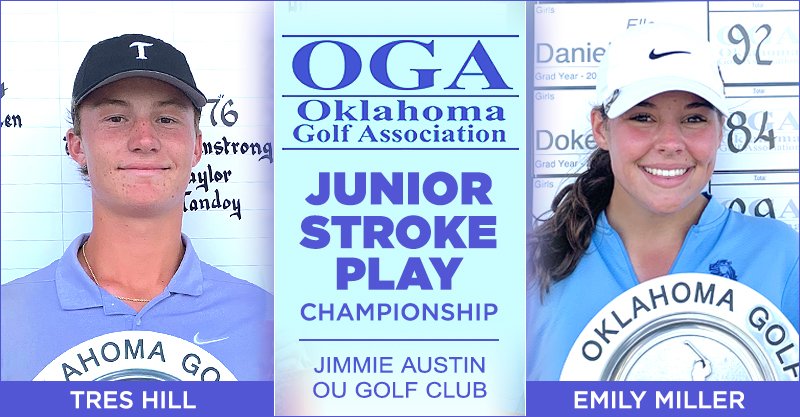 The junior golfers of Oklahoma may have missed their high school seasons and national junior events, but they are gaining some measure of compensation with a series of special events at some of the state’s top venues.

That continued Tuesday with an 18-hole Junior Stroke Play Championship run by the Oklahoma Golf Association at Jimmie Austin University of Oklahoma Golf Club in Norman.

Tres Hill of Elk City shot a 1-under par 71 to edge Brooksie Levonitis of Oklahoma City by a shot to win the boys division. Emily Miller of Edmond, who earlier won the OGA Junior Championship at Kickingbird GC in Edmond, prevailed in the girls division with a 76, two shots better than Olivia Coit of Edmond with a 78.

Brett Wilcoxen of Tulsa took third for the boys with a 74, followed by Dylan Teeter of Bixby at 75. Kaden Armstrong of Broken Arrow, Jesse Tandoy of Broken Arrow and Ross Taylor of Edmond each shot 76.

For the girls, Aiden Coffelt of 0f Edmond was third with an 82, followed by Sarah Sherrard of Moore  at 83. Tied for fifth were Gracie Doke of Tulsa and Rylee Roberts of Edmond at 84.

The Jimmie Austin OU event combines with earlier tournaments such as the Junior Masters at Southern Hills and the Oak Tree Junior Classic put on by Oak Tree Country Club, all special events added to the calendar to help the state’s juniors make up for some of what they have lost. This event was to have been a qualifier for the U.S. Junior Girls Championship and the U.S. Junior Boys Championship, both of which were canceled for 2020 by the USGA.