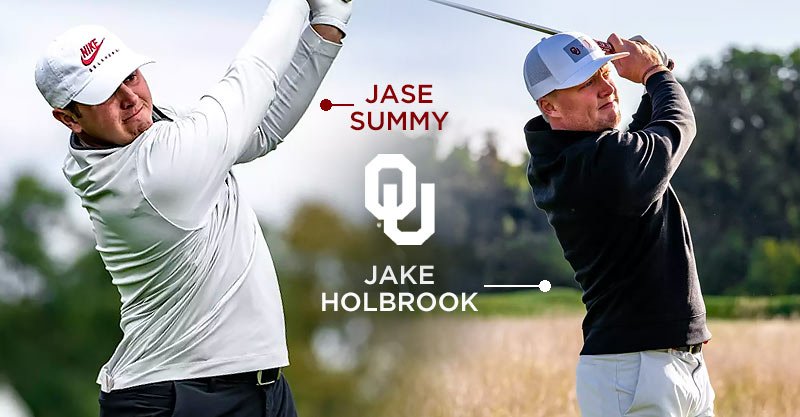 TOLEDO, Ohio — Playing through multiple rain delays, the Oklahoma men’s golf team wrapped up play at the Inverness Intercollegiate on Tuesday, finishing third as a team in the 16-team field.

Redshirt junior Jake Holbrook led the way for the Crimson and Cream, finishing in a tie for ninth to help Oklahoma (3, +11) take home the bronze. The Sooners were over par for just the second time in their last 10 regular season tournaments, as no teams finished even or under-par at Inverness.

“I just tried my best to keep it in front of me all week,” Holbrook said after the final round. “I just wanted to give myself as many chances as I could. I wanted to play smart, and always be around the hole with a chance to make birdie or save par.”-

The 54-hole tournament, which opened play Monday, featured 10 teams that were ranked or receiving votes. Oklahoma finished its opening round in a tie for third, just two strokes back of the lead. As the teams began play in the second round on Monday afternoon, rain moved into the Toledo, Ohio, area, forcing play to stop twice before tournament officials halted play due to darkness. The field closed their second rounds on Tuesday morning, where the Sooners played the last nine holes 1-under to move into solo third. But conditions worsened as Tuesday progressed with golfers battling 15 mph winds and near-constant rain. Oklahoma played its final front nine 10-over to fall into sixth at Inverness, but the Sooners finished their week strong, firing a 6-under on the back nine to secure the team’s 24th top-three finish in its last 27 tournaments.

Holbrook (T9, +2) fired rounds of 70-72-73 at the par-71, 7,265-yard course to notch a share of ninth. The Granbury, Texas, product led the Sooners on par-4s, playing such holes just 2-over on the week. The redshirt junior, who finished T19 at Frederica in his first event in over two years, led head coach Ryan Hybl’s team with nine birdies.

“My game feels really good right now,” Holbrook continued. “I feel like my game as a whole, feels more complete than ever, which means I’ve got no severe weaknesses right now.”

Freshman Jase Summy (T12, +3) was Oklahoma’s best option over the final two rounds. After an opening-round 73 (+2), the Keller, Texas, product signed for a 71-72 to close and secure his second top-15 finish to open his college career.

Patrick Welch (T15, +5) posted OU’s low round of the day on Tuesday, a 71 (-1) powered 16 pars with a pair of birdies and bogeys. The redshirt senior has finished in the top 15 at eight of his last nine tournaments dating back to last season.

Stephen Campbell Jr. (T20, +6) extended his top-20 finish streak to four tournaments, a streak that started at last year’s Big 12 Championship. The Richmond, Texas, native closed his round with nine straight pars to move up the leaderboard and share 20th.

Sophomore Drew Goodman (T28, +7) was in a good spot entering the final round after he matched Holbrook for OU’s lowest round of the week by signing for a 70 (-1) in round two. But the tough conditions hurt the Norman product on the front nine Tuesday, where he was 5-over par. He played the back nine even with seven pars, but finished in 28th at 7-over for the week.

Texas Tech (+1) took home the team title, despite Georgia Tech’s Christo Lamprecht (-7) taking home medalist honors. JP Roller of Jenks is a member of the Texas Tech squad, but did not start in this event.

Next up, the Sooners return to familiarity when they head to Colonial Country Club in Fort Worth, Texas, for the Ben Hogan Collegiate Invitational. In the two previous years, Oklahoma won the event in 2020 and finished as the runner-up by one shot last season. Current Sooners Patrick Welch (T19, T70), Jaxon Dowell (T7) and Drew Goodman (T41) are the only OU golfers with experience at the event. The 54-hole tournament is slated for Oct. 3-4.