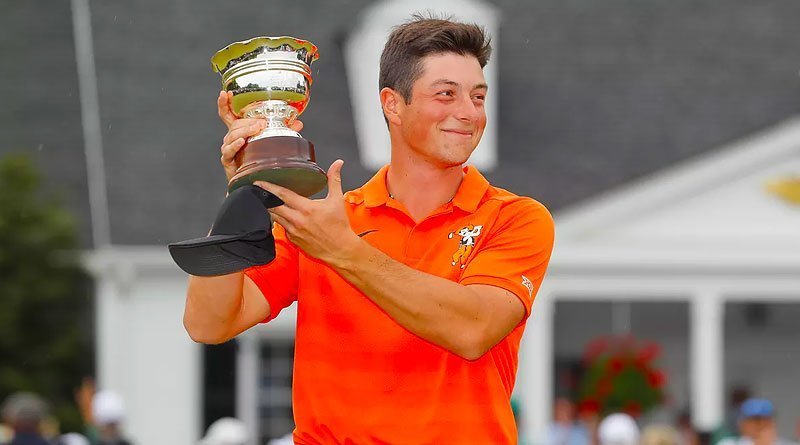 Viktor Hovland’s most surreal, nerve-racking moment at the 2019 Masters Tournament happened after he played on the renowned Augusta golf course.

Hovland, a junior on the Oklahoma State men’s golf team, sat in Butler Cabin and waited for the cameras to start rolling. Tiger Woods, who had just tapped in a putt that induced monstrous cheers from an animated crowd and sealed his first major victory in 11 years, hurriedly walked into the cabin to join Hovland for the TV interview. Hovland said Woods tapped him on the back and congratulated him.

“I didn’t really know what to say,” Hovland said. “I was sitting down and just kind of looking up.”

Hovland, the first Norwegian to compete in the Masters, finished as the Low Amateur at the tournament, which took place from April 11-14 at Augusta National Golf Club in Augusta, Georgia. He ended with a 3-under par score of 285 to tie for 32nd with Japan’s Hideki Matsuyama.

Although Hovland was awestruck when Woods complimented him, his confident, composed demeanor steadied him on his way to winning the Silver Cup. Alan Bratton, Hovland’s Cowboy golf coach, said he was honored to caddie for Hovland at the Masters.

“He kept asking me, he’s like, ‘Coach, what’s wrong with me? I’m really calm. I’m relaxed,’” Bratton said. “Where most kids are freaking out.”

Hovland qualified for the Masters when he won the 118th U.S. Amateur title on Aug. 19 in Pebble Beach, California. Experiences in tournaments such as the U.S. Amateur and PGA Tour events prepared him for some aspects of the Masters, but he hadn’t competed with such a massive, vocal group of spectators surrounding him.

“If it’s a big roar, it’s either a hole-in-one or Tiger Woods making the birdie, so it’s pretty cool,” Hovland said. “It gives you chills down your spine.”

Hovland, one of four amateurs to make the cut, said his birdie on the second hole helped him relax in the first round. He hit the ball into the water on the 11th hole, but he recovered with more birdies that helped him settle into his game.

“That’s kind of when I started to ease down a little bit knowing that OK, I have a few, not easy holes, but I can make something happen,” Hovland said. “And I did, and I ended up being in a decent position after the first round, and then I was kind of ready to keep going.”

Hovland finished with a first-round score of 72 and followed with a score of 71 in each of the three remaining rounds. The experience exposed him to a variety of strategies and techniques. He said he learned from professionals Sergio Garcia, Bernhard Langer, Brooks Koepka, Dustin Johnson and former Cowboy Rickie Fowler.

After competing against them and sitting in Butler Cabin next to Woods, Hovland returned to his dorm at OSU. Amid the glory of PGA Tour events, he is also enjoying the opportunity to play on a college team. Hovland, a semifinalist for the 2019 Ben Hogan Award, is striving to help the Cowboys win their second straight national championship.

“To see the Swinging Pete logo there was huge,” Bratton said. “But more than that, to just see a product of our program, Viktor Hovland, represent himself with that much class and humility on a big stage like that, that’s huge for Oklahoma State golf but just for our university as a whole. It was a really proud moment, I think, for anyone that bleeds orange for sure.”