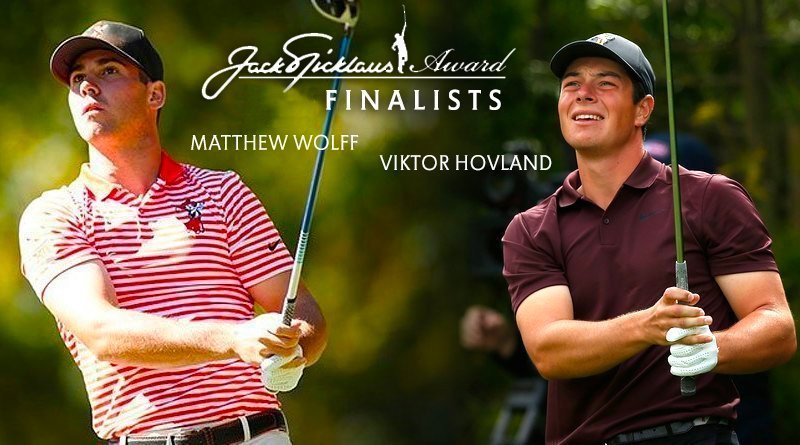 NORMAN, Okla. — Oklahoma State’s Viktor Hovland and Matthew Wolff were among the five finalists named for the 2019 Jack Nicklaus National Player of the Year Award presented by Barbasol.
The Cowboy duo was joined by Colin Morikawa of California, Clemson’s’ Bryson Nimmer, and Justin Suh of Southern California as finalists for the award. The winner will be announced May 30. The Award presentation will be held at Muirfield Village Golf Club in Dublin, Ohio, and presented by award namesake Jack Nicklaus during the final round of the Memorial Tournament presented by Nationwide.
In addition to receiving the Jack Nicklaus National Player of the Year Award, the five recipients will compete in the Barbasol Shootout for an exemption into the PGA TOUR’s Barbasol Championship, held July 18-21, at the Champions at Keene Trace in Lexington, Ky. The Barbasol Shootout will be held Saturday, June 1 at The Ohio State University Golf Club’s Scarlet Course in Columbus, Ohio – the same club where Jack Nicklaus played collegiate golf for the Buckeyes.
Hovland has three victories during the 2019 season and has registered a scoring average of 68.59 in 22 rounds played. In those 22 rounds, 16 have been in the 60’s. Hovland also has six top-10 finishes and finished solo second at the Big 12 Championship. The junior from Oslo, Norway was recently named the Ben Hogan Award winner.
A five-time winner his sophomore season, Wolff has registered a scoring average of 68.58 in his 31 rounds. In addition to his five victories the Agoura Hills, California, native has placed top 10 in eight of his eleven starts.

Nicklaus, a Big Ten and NCAA Champion at The Ohio State University, helped inspire and create the Jack Nicklaus Award in 1988 and it is now presented to the National Player of the year in NCAA Divisions I, II and III, as well as NAIA and NJCAA.