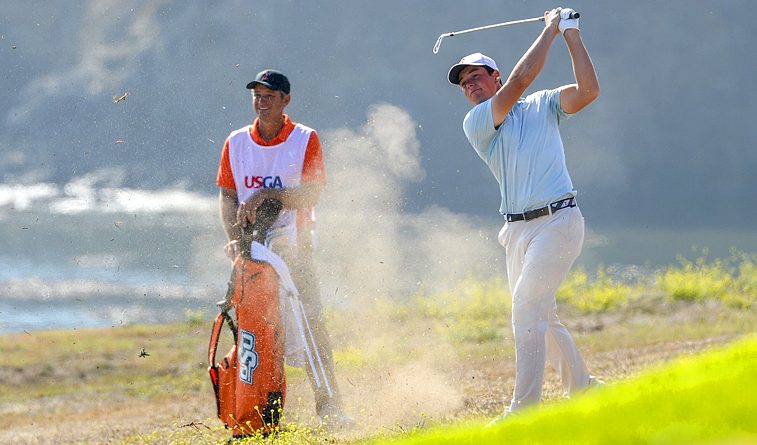 Viktor Hovland of Norway, the No. 5 player in the World Amateur Golf Ranking (WAGR), made eight birdies in 16 holes on Saturday to eliminate co-medalist Cole Hammer from the 118th U.S. Amateur Championship, 3 and 2, and set up a 36-hole final against Devon Bling, of Ridgecrest, Calif.

Bling, 18, a rising sophomore at UCLA, was equally impressive in his semifinal victory over Isaiah Salinda, of South San Francisco, Calif., making seven birdies and taking the lead for good on the eighth hole in his 1-up triumph.

Hovland, 20, a rising junior at Oklahoma State University who is playing in his second U.S. Amateur, dashed the hopes of Hammer, who was seeking his second USGA championship of 2018, having won the U.S. Amateur Four-Ball with Garrett Barber in May. Hammer, the No. 2 seed, hit his tee shot out of bounds on the second hole and lost the third hole to Hovland’s birdie. Although Hammer battled back to square the match on three occasions, Hovland took the lead for good on No. 13 with his second of five consecutive birdies to close out the match, capping the win with an 8-foot putt on the par-4 16th hole.

“There were a few matches this year where I got away with not playing great golf, and that was just not going to happen today,” said Hammer, 18, an incoming freshman at the University of Texas who had been 12-1 in his matches at the U.S. Junior Amateur, the Western Amateur and the U.S. Amateur heading into Saturday. “He just played great, made everything he looked at. Pars were never going to win the hole. It was just a test, honestly, to play him today.”

Hovland was coming off consecutive 7-and-6 victories in the Round of 16 and the quarterfinals, and he is bidding to become the first player from Norway to win the U.S. Amateur, as well as the first player from Oklahoma State since Peter Uihlein in 2010. He took full advantage of the calm, soft conditions brought on by the fog that lingered over the course for much of the morning.

“The wind wasn’t blowing as hard, and the greens were a little softer, so the conditions were definitely conducive to making birdies,” said Hovland, who will play the 18th hole for the first time in match play in Sunday’s morning round. “But you’ve still got to hit the shots, and you’ve got to make the putts. I think we fed off each other a little bit. He made a putt and then I answered, if not the same hole then on the next hole. It was a really good match.”

“All aspects of my game were firing on all cylinders,” said Bling. “It was a battle against Isaiah. He played really well himself. I was happy to come out on top.”

On Sunday, Bling will try to become the first player since Nathaniel Crosby in 1981 to win the U.S. Amateur in his home state (Crosby won at The Olympic Club in San Francisco). He will attempt to do so against a player who has trailed for only one hole over his first five matches this week.

“It seemed like everybody on the property was rooting for Cole – they wanted to see the young guy win,” said Alan Bratton, the Oklahoma State coach and Hovland’s caddie. “It’s a perfect motivator for somebody who’s really on their game. I think Viktor has just been himself this week and he’s really built momentum every single day.”

The 36-hole championship match begins at 7:30 a.m. PDT on Sunday. The match will be streamed live on usga.org beginning at 12:30 p.m. EDT, and Fox will show the afternoon round of the match starting at 4:30 p.m. EDT. Both players have earned berths in the 2019 U.S. Open at Pebble Beach, as well as likely invitations to the 2019 Masters Tournament. The winner will also earn a spot in the 2019 Open Championship, conducted by The R&A.

►Hovland is the sixth Oklahoma State player in the last 23 years to reach the U.S. Amateur final. Peter Uihlein in 2010 is the only one of those Cowboy players to prevail.

Alan Bratton, coach at Oklahoma State and Hovland’s caddie this week, on the key to the match:

“When Viktor made the [birdie] putt on No. 10, he was really off and running. But I thought the key to the match was the putt that Viktor made on No. 14 [to halve the hole in birdies]. When he made that, it stole some momentum from Cole, even though Cole also made a birdie. Then Cole followed it with his 3-wood into the bunker off the 15th tee (leading to a bogey and a 2-up lead for Hovland).”

Viktor Hovland, on how he got to Oklahoma State from Norway:

“In high school in Norway, my plan was set, I was going to go to college and play. I started playing good my senior year and some coaches were recruiting me. I ended up visiting Texas Tech, TCU, Tennessee, and then Oklahoma State. I went there and saw all the trophies and how they talk about the program and the history, and the guys on the team were really nice. Kris [Ventura, of Norway] really helped me understand what was going on at Oklahoma State, so that made the decision pretty easy.”

Isaiah Salinda, who was coming off a course-record 62 at The Olympic Club in his victory in the Pacific Coast Amateur three weeks ago:

“I didn’t really know what to expect coming into this week, but once I made match play, I thought I had a pretty good chance, and kept advancing. But I played well today. That’s all I could ask for. Devon played awesome.”

Devon Bling, on seeing the U.S. Open Trophy on the first tee:

“I was pretty surprised. That’s why I took a long look at it, just to soak it in a little bit because of just being that close to it.”