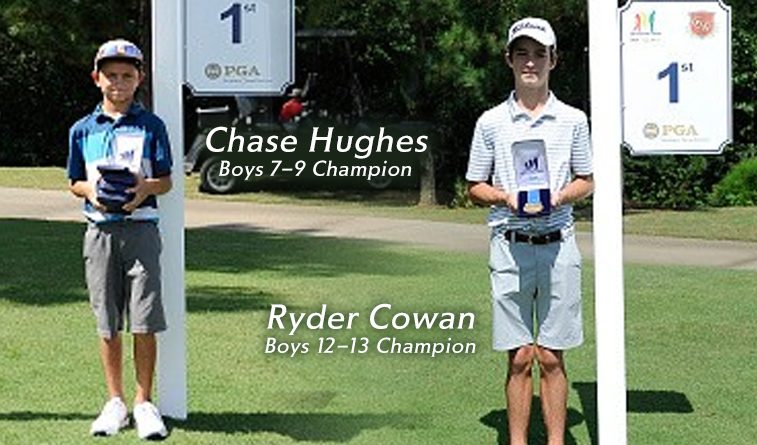 Competitors began their day on the Nicklaus course’s first tee at the Drive station hitting three drives before proceeding to the Chip and Putt stations. Three chips, each from fifteen yards away, and putts from six, fifteen, and thirty feet plus the three drives paved the way for eight junior golfers to fulfill the dream of a lifetime and make the trip to Augusta National a reality.

In the closest finish of the day, Chase Hughes from Oklahoma City edged Miles Cooper by one point to win the Boys 7-9 event. Hughes, who finished third in this summer’s U.S. Kids Nationals in Pinehurst, N.C., knew what he had to do with the final putt of the day – get it in the 15-point range. He did just that and will be making a trip to Augusta. Oklahoma’s Neely Kight won the drive in the Girls 7-9 Division and Benjamin Stoller placed fifth in the Boys 14-15 Division. Ryder Cowan from Elk City won the Boys 12-13 division.

Southern Texas Junior Golf Program members Treed Huang, Maye Huang, and Aadi Parmar won the Boys 14-15, Girls 10-11, and Boys 10-11 Divisions, respectively. Treed and Maye, who are siblings, will be making return trips to Augusta, as this will be Treed’s fourth time competing in the National Finals, and Maye’s second trip. Each will also be vying for their second career win at Augusta National, as Treed won the Boys 7-9 Championship in 2014, while Maye won the Girls 7-9 Championship in 2017. Aadi Parmar will take the trip down Magnolia Lane for the first time come next April, and looks to take advantage of his trip with another accolade in his Drive, Chip & Putt career.