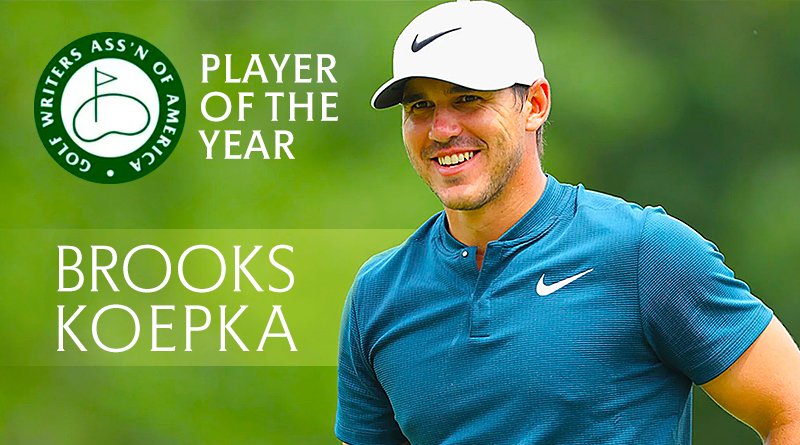 HOUSTON (January 7, 2020) – World No. 1 Brooks Koepka’s impressive record in last year’s majors propelled him to his second consecutive Golf Writers Association of America’s Player of the Year Award, while Jin Young Ko and Scott McCarron won their respective 2019 Player of the Year honors.

Koepka, who was sidelined with a knee injury in the fall, crushed the majors in 2019. In addition to winning his second consecutive PGA Championship, he finished in the top four at the other three majors. He was tied for second at the Masters, second alone at the U.S. Open and T-4 at The Open. In addition to the PGA, he won the WGC FedEx St. Jude Invitational and T-2 at the Classic, T-3 at the TOUR Championship and fourth at the AT&T Byron Nelson.

“I am extremely humbled to receive this award for a second year in a row,” said Koepka. “The GWAA does so much for the game we all love, so to be their Player of the Year again is a real honor.’’

Ko, in just her second season on the LPGA Tour, ran away with the Female POY race with Nelly Korda finishing a distant second.

The South Korean star won four times, including two majors and swept every major LPGA award. She won the ANA Inspiration and Evian Championship and posted 12 top-10 finishes and ended the year winning the Rolex Player of the Year, the money title and Vare Trophy. Her 69.052 average was the second-lowest mark in LPGA history to Annika Sorenstam’s record of 68.697 in 2002.

She made headlines, too, for playing 114 holes without a bogey, besting Woods’ record by four holes.

“It is a great honor to win this prestigious award,” said Ko. “To be recognized by golf writers, who cover our sport of golf all year long, makes it even more special. I’m really proud and excited to be named alongside all the other recipients of this award in the past.”

“To be selected Senior Player of the year by the Golf Writers Association of America is truly a great honor,” said McCarron.

Koepka, Ko and McCarron will receive their awards at the 48th ISPS HANDA GWAA Annual Awards Dinner on Wednesday April 8 in Augusta, Georgia.