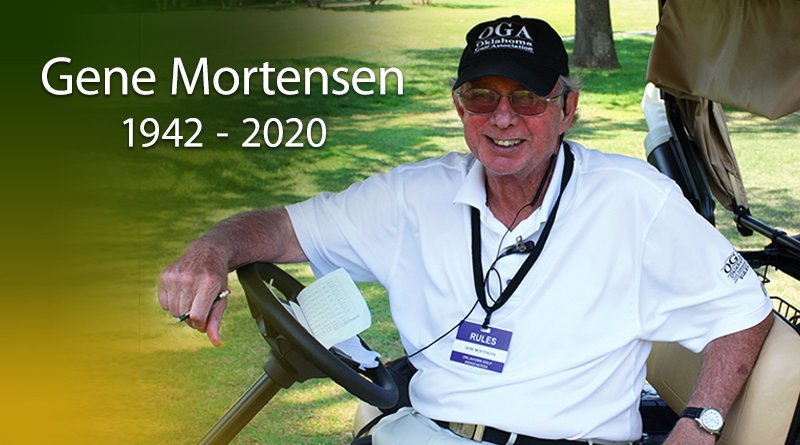 Mortensen, Thompson a study in contrasts

Update: There will be a celebration of life for Gene Mortensen at 4 p.m. Friday at Tulsa Country Club and the public is welcome. In lieu of flowers, the family asks that donation’s be made to the Oklahoma Golf Association Foundation. Call 405-848-0042 for more information on the foundation.

Golf Oklahoma joins with the rest of the Oklahoma golf community in expressing our condolences to the family of long-time Oklahoma Golf Association rules chief Gene Mortensen, who passed away Thursday at age 78 after a long battle with cancer.

Mortensen, a brilliant lawyer by profession, volunteered for the OGA and the USGA for many  years after retiring from his law career at age 55. An enthusiastic golfer, Mortensen was recruited to the OGA team by former executive director Bill Barrett. He was passionate about the rules and enforced them strictly, leading some whom he penalized to think he was a bit of a curmudgeon. But as current OGA Executive Director Mark Felder said, you didn’t have to look far past a rules encounter to get to know the real Gene Mortensen.

“He was my hero more than anybody will ever know and one of the greatest guys I’ve known in my life,” Felder said. “He was completely misunderstood by most people. He was way more fun than most people ever knew and extremely intelligent. He played an invaluable role for the OGA over these last 28 years as a board member and mentor, helping us out with some sticky situations.”

Son Joel Mortensen, the general manager at the Broken Arrow Golf & Athletic Club, said today that official obituary and services would be announced soon. He said Gene was a great father.

“He was stern on the rules and didn’t let me or anyone slide, and in person he could be somewhat sarcastic, but once you got past that he was your best friend,” Joel said.

“We’ve lost a bastion of Oklahoma golf,” said fellow OGA rules official David Thompson. “As Jack Steinmeyer said, Gene’s probably up there handing out penalties in heaven. He was my mentor and very instrumental in the growth of the OGA and Oklahoma golf. He was a very giving individual.”

Gene was born North Dakota, growing up in the town of Luverne. He graduated from Bemidji State University in Northern Minnesota and from the University of Tulsa Law School in 1968. He began working full-time with the OGA when he retired from his law career in 1998.

Long-time Tulsa PGA professional George Glenn worked with Gene on many tournaments and said he felt bad that many competitors never got to know him beyond his rules persona.

“Most people remember him as Mean Gene, but he was a very sincere, loving guy,” Glenn said. “He was really a wonderful man. He taught me a lot about the rules, he was like a walking encyclopedia. Just a fun-loving wonderful man who helped the game so much.”

Mortensen wrote a rules column for nearly every editorial issue of Golf Oklahoma for the past 10 years, just another way he gave back to the game and to Oklahoma golfers. I would email him anytime I had a question about the rules and he would patiently explain to me why I was wrong again or congratulate me on the rare occasion I had it right.

Thanks for everything Gene and you will be greatly missed.