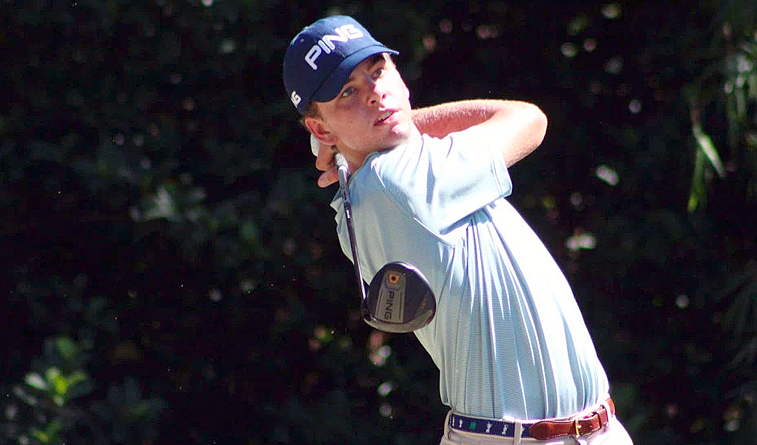 Kelly Chinn, 15, of Great Falls, Va., earned medalist honors in his first USGA championship, following up Monday’s 66 with a 3-under 67 on the Lower Course at Baltusrol Golf Club. Chinn birdied five of his last six holes on Tuesday to vault to the top of the leader board with a 36-hole score of 8-under 133, besting Ricky Castillo and Karl Vilips by two strokes.

Round 2 was delayed for just over four hours on Tuesday due to heavy thunderstorms. Play resumed on Baltusrol’s Upper and Lower courses at 6:20 p.m. EDT, and stroke play concluded right before dusk.

Logan McAllister of Oklahoma City, who will be a freshman at the University of Oklahoma in the fall, safely advanced to match play after rounds of 72-73 left him tied for 40th at 3-over. He will face Robin Williams of England this afternoon in the first round of match play. You can follow the match play bracket here.

Carson Griggs of Sand Springs did not make the cut for match play after shooting consecutive rounds of 78.

“I feel really good about my game, so I’m really excited for match play,” said Chinn. “This is such a huge tournament. Just to be in it was amazing, and to be medalist would be really high on my achievement list.”

Vilips, who shared the lead with Chinn after Round 1, was also solid on the Lower Course Tuesday. The Australia native hit a wedge to 2 feet on No. 18 for a birdie to finish off a 1-under 69. The 16-year-old had four birdies to go along with three bogeys, all of the latter coming on the back nine.

The round of the championship thus far was turned in by Japan’s Yuki Moriyama, who fired a bogey-free, 5-under 65 on the Lower Course, including a 29 on the front nine, tying the championship record for nine holes.