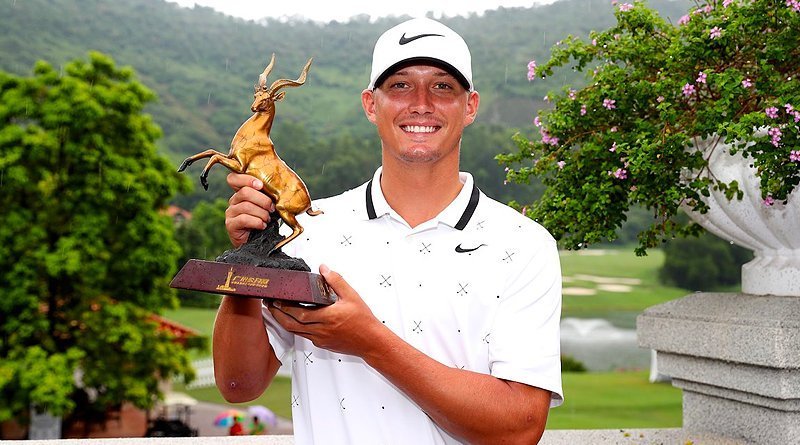 GUANGZHOU, China—It was only a matter of time. After six-top 10s including four finishes inside the top-five, former Oklahoma Sooner Max McGreevy of Edmond finally lifted his first trophy in China after being declared the 36-hole champion at the weather-affected Guangzhou Open. Although considered an unofficial victory, the prize money is very much real. The RMB 288,000 he earned moved McGreevy to the No. 1 spot on the Order of Merit with five events remaining.

It was the fourth consecutive day of weather delays, and it took until Sunday morning to complete the second round. Officials had originally reduced the tournament to 54 holes, but only a few players had started their final rounds before another suspension, at 10:39 a.m., due to lightning in the area. Shortly after, officials decided to reduce the event based on the 36-hole results, fearing that it would be unlikely players could complete a full round in the bad weather conditions forecasted for the rest of the day.

This turned out well for McGreevy, who had backed a low, 7-under 62 with a 67 the following day to hold a two-shot overnight lead over fellow American Trevor Sluman, who still had four holes remaining in his second round. Sunday morning, Sluman began with a bogey on his re-start on hole 6 but closed with a birdie on hole 9 to finish at 7-under. He didn’t know it at the time, but that birdie would end up being crucial as it secured him solo second, one shot ahead of six players in a tie for third who had all completed their rounds Saturday.

McGreevy admitted it was not the ideal way to earn his first PGA TOUR-affiliated victory but the 24-year old was still delighted to come out of a difficult week on top.

“I’m a little upset that we didn’t get to get more rounds in, but it ended up how it is and I can’t do anything about it. It’s unfortunate, and I would have liked to play against all these guys. It would have been a really good test,” said McGreevy, who understood how important the opening two rounds could be. “I was trying to get to the top after two rounds just in case something like this happened, and it’s lucky for me but stinks for everybody else. I’ve also been in their position but I’m happy to finally be able to lift the trophy.”

McGreevy became the third player from the University of Oklahoma to win in China since 2016. Luke Kwon won the Qinhuangdao Championship earlier this year and Charlie Saxon, the Tour’s all-time money-list leader, won twice in 2016 and twice in 2018 and currently plays on the Korn Ferry Tour. McGreevy and Saxon are currently roomates in Dallas, Texas, where they both reside, and McGreevy is hoping to return to the Korn Ferry Tour and play alongside Saxon next season.

“The goal is definitely going to stay No. 1 on the Order of Merit. I only had it for one week in Suzhou, but I’ve played good all year and hopefully I can keep it up and keep the No. 1 spot for the rest of the year,” said McGreevy, who moved atop the list after finishing third at the Nantong Championship. “I’m excited to see what happens, but it’s going to be challenging. These other guys are playing well just like I am so hopefully I can hold another trophy at the end of the year, as well.”

For Sluman and the other players chasing, it was a frustrating ending to not be able to compete for the title Sunday. However, Sluman is looking at the positives and remains in a good position in the Order of Merit race, currently in second place, just over RMB 100,000 behind McGreevy.

“Max played great, so he deserves the win. The lowest man won the tournament, and 36 holes is what defined that this week. I’m pleased with a solo second, and it’s my second one this year. All that helps towards the total prize money for the end of the year,” said Sluman, who finished ninth on the Tour’s 2018 Order of Merit. “It was pretty cool to have the one-through-three players on the Order of Merit finish first, second and [tied] third this week. I bet it probably doesn’t happen too often.

“I haven’t played with Max yet,” Sluman added, “so hopefully we will be able to battle soon enough on a Sunday afternoon.”