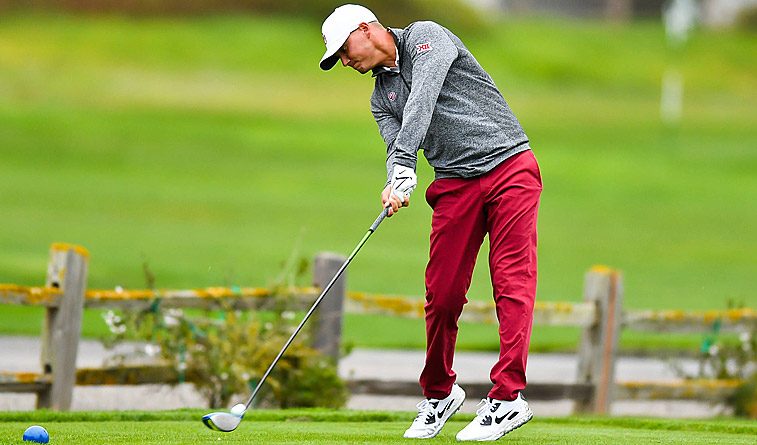 Paced by a record round from senior Max McGreevy, the No. 11 Oklahoma men’s golf team is tied for second place through 36 holes at the Lone Star Invitational. The two-day, 54-hole tournament is taking place at the par-72, 7,247-yard Briggs Ranch Golf Club in San Antonio, Texas.
The Sooners fired a 10-under 278 in the first round of play and a 279 in the second, marking the squad’s third- and fourth-best rounds of the season, respectively, to total 557 (-19) on the day.
No. 6 Illinois is in front of the 15-team field with an overall 549 (-27). The Sooners share second with UTEP, and tournament host UTSA is in fourth at 559 (-17). Mississippi State rounds out the top five at 562 (-14).
McGreevy was impressive all day, playing bogey-free through all 36 holes. The Edmond native shot a 3-under 69 then tied a school record with a 9-under 63 in the afternoon. The senior’s career-low round matches the school record last achieved by Grant Hirschman in 2016.
Additionally, the 63 marks the lowest 18-hole score in the seven-year history of the Lone Star Invitational. At 12-under 132, McGreevy sits atop the individual leaderboard.

“It was a fun day on the course watching Max get after it,” eighth-year head coach Ryan Hybl said. “He had a great day for sure, and I know he will back it up tomorrow.”
Junior Rylee Reinertson is also currently in the top 10, holding a share of eighth at 139. Reinertson fired a season-low 67 in the first round with five birdies and an eagle on the par-4 14th hole and carded a 72 in the second round.
Hirschman is tied for 15th individually with a 36-hole 141. The junior posted a 69 and a 72 in the first and second rounds, respectively, pocketing 10 birdies total on the day.
Sophomores Blaine Hale and Brad Dalke hold a share of 38th and 48th place, respectively, at the end of day one. Hale totaled a 145 on Monday with a 73 and a 72over the two rounds. Dalke shot a 74-72.
“We did not do a very good job with some of our scoring clubs, and our putting was not great,” Hybl said. “We need to turn that around tomorrow and put together a great round.”

Competing as an individual and unattached from team scoring is freshman Garett Reband, who is tied for 15th overall after rounds of 74-67.

The final round of the Lone Star Invitational is scheduled for Tuesday morning. Playing as a group, the Sooners will tee off at 8:30 a.m. CT from hole No. 2. Live scoring will be available on GolfStat.com.