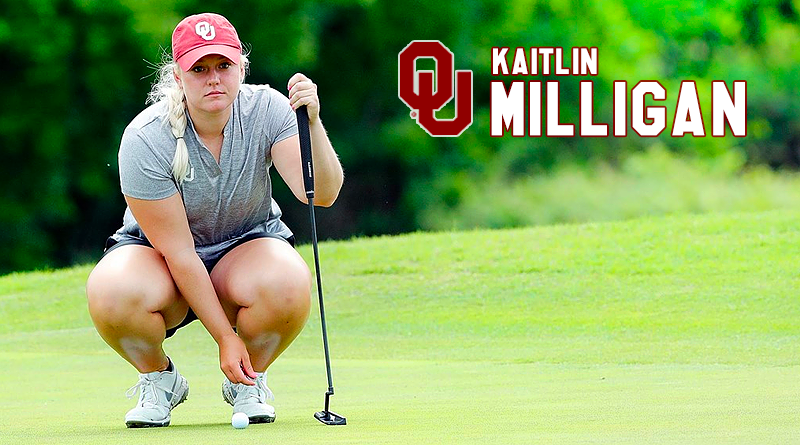 The first day of competition in Oklahoma’s 2019-20 season was met with tough conditions and three weather delays, but the Sooners ended Monday in fourth place at the Minnesota Invitational. OU has played up to eight holes of its second round and will resume play Tuesday at 10 a.m. CT at the par-72, 6,297-yard Prestwick Golf Club in Woodbury, Minn.

The tournament was originally slated to consist of three rounds, but has been shortened to 36 holes due to the weather pushing back play. With just over half of a round remaining, the Sooners (+5) are three strokes behind co-leaders Kentucky and Virginia Tech (+2).

Oklahoma opened the morning round with a 2-over 290 – the second lowest score in the 15-team field.

“We played in some tough conditions today but finished our first round very strong,” said OU head coach Veronique Drouin-Luttrell. “We have over half a round left to finish strong and we’re in a great position.”

Junior Kaitlin Milligan picked up right where she left off last season, carding six birdies in her first round to shoot a 2-under 70. She remains at 2-under and is tied for fifth place with 12 holes left in her second round.

Caterina Don of Georgia fired a 66 (-6) in the first round and leads the field of 81 golfers.

Joining Milligan in the top 20 is sophomore Mikhaela Fortuna, who is tied for 11th. Fortuna picked up three birdies over her final seven holes to shoot a 1-under 71 in the first round.

Freshman Maria Fernanda Martinez, making her collegiate debut, shot a 74 (+2) in the first round while junior Sydney Youngblood produced a 75 (+3) and sophomore Libby Winans carded a 76 (+4).

Live stats from the continuation of OU’s second round can be found at Golfstat.com.