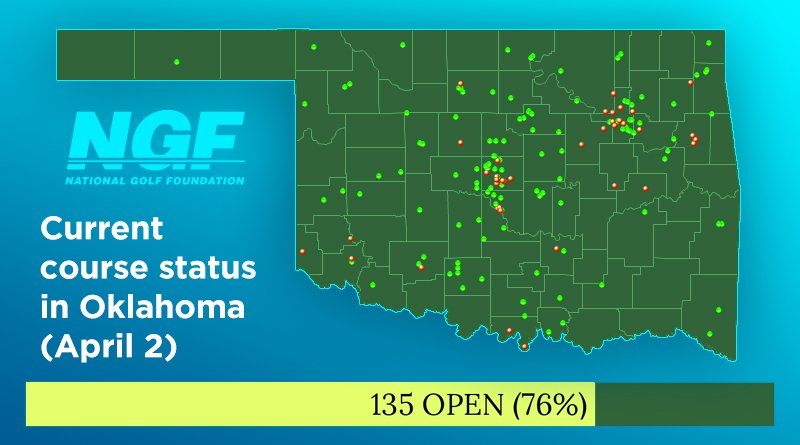 The National Golf Foundation found that 76 percent of Oklahoma golf courses remain open in a review conducted for its new website that tracks courses closures during the COVID-19 pandemic. Click here to see the website and map.

The NGF is highlighting one or two states each day. In Oklahoma, it found 135 of 178 courses were open.

Among other courses closed are Cherokee Hills in Catoosa, Kickingbird in Edmond, John Conrad in Oklahoma City, Choctaw Creek and Lawton Country Club.

Oklahoma City Mayor David Holt said in a 1 p.m. press conference today that Oklahoma City is extending its shelter in place order through April 30 and to expect it to last longer. Without mentioning golf specifically, he said people and businesses should stop looking for loopholes.

Tulsa Mayor G.T. Bynum has also shown no signs of letting courses reopen. Plans for how to fund and maintain the city courses for an extended shutdown have not been announced and emails to city officials requesting information about those plans were unreturned. Tulsa County did announce that it was retaining its maintenance staff for LaFortune Park and South Lakes during the shutdown, as did the head professionals of the Oklahoma City public courses who are in charge of their respective maintenance crews.

The debate nationally over whether golf remains a safe activity during the pandemic goes on. Public courses in Dallas and Topeka, Kan., were reopened this week after earlier being shut down by stay-at-home orders similar to the ones issued in Tulsa and Oklahoma City. Despite the closures in the Tulsa city limits, all the suburban private and public courses remain open including those in Broken Arrow, Owasso, Claremore, Sapulpa and Bartlesville.