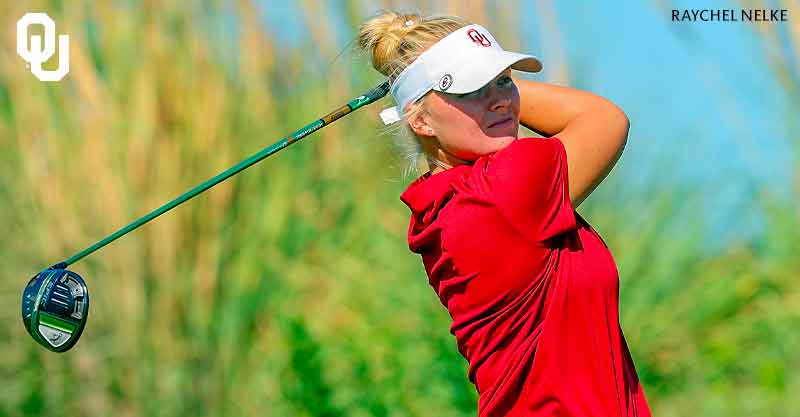 NORMAN –The Oklahoma women’s golf team maintained its second-place position after the Schooner Fall Classic second round at Belmar Golf Club Sunday. Oklahoma State is in fourth and the University of Tulsa is 10th in the 16-team field.

Raychel Nelke led the OU lineup and fired an even par 70. Nelke opened the front nine with an even par 36 and birdied on the par-5 ninth hole. The freshman from Pocola, Okla., suffered a setback on the 13th hole and responded with a birdie on the 15th to move back to even. She parred her final three holes and is tied for 30th, moving up 18 spots.

Savannah Barber and Mikhaela Fortuna continue to anchor the Sooner lineup at the Schooner and both are in the top 15 after each fired 4-under 66 rounds yesterday, Fortuna finished with a 1-over 71 and Barber recorded a 2-over 72.

Fortuna is tied for eighth and recorded a pair of birdies on the day. She finished the front nine 1-over 37 and dropped a stroke on the 14th hole. Fortuna drained a birdie on 15th and maintained her 1-over tally through the remainder of the round.

Barber tallied three birdies on the day and finished her first nine holes 1-over 37. After a birdie on the par-5 12th hole, she dropped two strokes on the 14th. The freshman from Fort Worth, Texas parred her remaining holes.

Winans recorded a 7-over 77 and Martinez finished 9-over 79. Martinez netted a birdie on her final hole of the day.

Madison Smith led the four Oklahoma individuals in the field and matched Nelke’s even par 70. Smith tallied five birdies on the day and tallied back-to-back birdies to conclude her round. She is tied for 22nd.Kaylee Vesely recorded a 3-over 73 and is tied for 47th. Gracie Mayo and Nina Lang each finished their second round with a 5-over 75.

Oklahoma State will head into Monday’s final round in fourth place at even-par after shooting a 5-over 285 Sunday.

The Cowgirls currently trail the leader, Florida State, by eight strokes, but are only two shots back of second-place Oklahoma. There isn’t much breathing room between much of the field in Norman, as the gap between second and tenth place is only eight shots.

“We got off to a rough start on the front nine,” head coach Greg Robertson said. “But they did well. They came back on the back nine and made some birdies. They battled the wind pretty good on the back side and got us back into a decent position.”

Clemence Martin led the way again for the Cowgirls after posting a solid 1-under 69 and remained in a tie for third at 5-under. A sophomore, her 36-hole score of 136 is the best of her career.

Martin has dominated the par fives so far in Norman, shooting 4-under on such holes, and has carded 10 total birdies, which is good enough for second most in the field.

“She made four birdies on the back nine,” Robertson said about Martin. “That was good to see her gather herself. Again, this is her first tournament in about six months… She’s handling herself well.”

Han-Hsuan Yu fired her best round since the Mountain View Collegiate in March of the 2021-22 season with a 3-under 67, moving her into a tie for 22nd. Yu finished with the lowest score of the day for the Cowgirls thanks in large part to racking up an impressive five birdies.

Senior Hailey Jones posted a 4-over 74 on Sunday but will carry momentum into Monday thanks to an even-par back nine. She sits in a tie for 64th at 8-over after the first 36 holes of the weekend.

Rounding out the starting five for the Cowgirls was Maddison Hinson-Tolchard and Rina Tatematsu, who recorded scores of 75 and 76, respectively.

Thitaporn Saithip, playing as an individual, heads into the final round in a tie for 17th place at 1-under after shooting a 72 on Sunday. A freshman, she is looking for her second career top-10 finish in as many tries.

Cecilie Leth-Nissen is also competing as an individual this weekend, and carded a second round 75 to finish the day in a tie for 70th.

Tulsa sits in 10th place after a round of  288 Sunday following an opening round of 278. Tulsa sits just five strokes out of the top five heading into Monday’s final 18 holes.

Tulsa freshman Grace Kilcrease and sophomores Lovisa Gunnar and Sydney Seigel are tied for 30th place with scores of 141 after the first 36 holes. Kilcrease and Gunnar carded rounds of 71 Sunday, while Seigel shot an even-par score of 70.

Another pair of freshmen, Emily Boehrer and Jenni Roller, sit in 42nd and 64th place, respectively. Each golfer carded a round of 76 today, while Boehrer has a two-round score of 143 score and Roller has a 148 total.

Florida State leads the team field with an 8-under par 552 total, followed by second-place Oklahoma’s score of 2-under par 558.