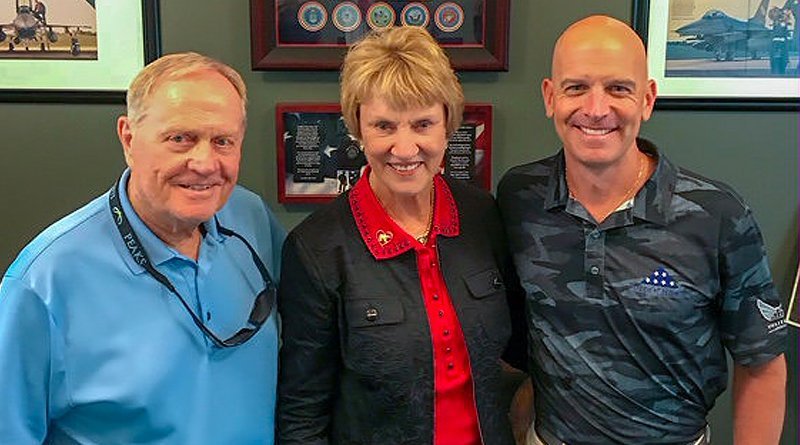 GRAND HAVEN, Michigan (May 27, 2019) —Folds of Honor founder Dan Rooney has announced that Jack Nicklaus and Nicklaus design will provide an extensive reworking of the Rooney’s course Grand Haven Golf Club on the shores of Lake Michigan, with the new course to be called American Dunes Golf Club.

Grand Haven Golf Club hosted the first golf tournament that would inspire the formation of Folds of Honor and Patriot Golf Day. Now, the original layout is being totally redesigned and reimagined by Nicklaus and Nicklaus Design, and rebranded as American Dunes. A Jack Nicklaus Signature Golf Course, American Dunes will pay tribute to the United States military.

“I love the game of golf,” Jack Nicklaus said, “but I love my country even more.”

Grand Haven first opened in 1965 and was designed by Michigan architects Bruce Matthews and his son Jerry Matthews. In 1998, Dr. John Rooney—father of Major Dan Rooney—bought the club. It was 20 years later, when Dan sat down with Nicklaus on the back patio of The Bear’s Club in Jupiter, Florida, and told him of his vision to transform Grand Haven and preserve the birthplace of Folds of Honor. The Golden Bear quickly agreed to come on board and bring with him the world’s leading golf course design firm.

“American Dunes represents a collaboration of countless like-minded patriots, who want this golf course to forever stand as a tribute to the men and women of our military, a safe haven for veterans who find rehabilitation through the recreation of the game, and a backdrop to celebrate our country and those who fought for its freedom,” said Major Dan Rooney, a fighter pilot in the USAFR and PGA Professional who founded Folds of Honor in 2007. “To fund the construction of American Dunes there are 18 individual hole sponsors and a small group of investors. This group of Patriots is allowing our dream to take flight. With a target opening date of Memorial Day 2020, American Dunes will proudly stand as a vessel to raise awareness and donations for Folds of Honor, while recognizing the legacy of Barbara and Jack’s contributions to our military.”

Among the individuals and companies who have donated their time and resources includes the work of Jack Nicklaus, Nicklaus Design’s senior designer Chris Cochran, Superior Golf Concepts, Jon Scott Agronomic Consulting, and dozens of other donors.

“The Nicklaus Companies has a long history of giving back in its products or services, whether the beneficiary is junior golf or pediatric healthcare,” said Howard Milstein, Executive Chairman of the Nicklaus Companies. “But one of the important pillars of philanthropy, and something very dear to the hearts of Jack and Barbara Nicklaus, is to give back to the military men and women who have sacrificed limb and life for our country’s freedom. That’s why our company donated design services to American Lake Veterans Golf Course outside Tacoma, Washington; why we have consulted on a number of other veteran projects to provide recreation and rehabilitation for our heroes; and why we are in full support of American Dunes.”

The site is a blend of sandy soil, mature trees, elevation change and rolling terrain about 200 to 300 yards off Lake Michigan. Work is well underway at American Dunes, and the Golden Bear and Cochran have made several trips to the site, and are unlocking its potential.

“The property is basically sand underneath,” Nicklaus explained. “It had magnificent trees that had grown up over time, but is that really what this golf course is or should be with the dunes off the lake? What we are trying to do is create a golf course that will open up that feeling of coming off Lake Michigan, having the dunes, and then incorporating that into some of the inland areas that have the beautiful trees. The combination of the two—being able to play through and around exposed dunes as well as tree-lined holes in some places—really creates a golf course that is rather unique. If we can do that, and at the same time honor our military and raise money for the education of the families of our fallen soldiers, this is going to be something very unique and very special in the game of golf.