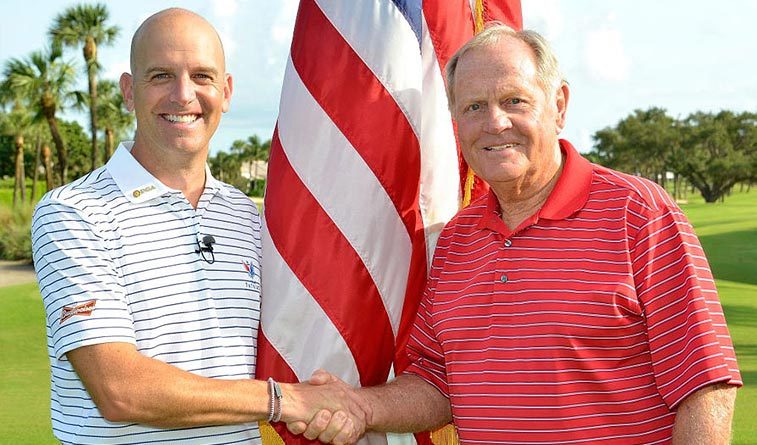 OWASSO, Oklahoma, (August 2, 2017) – This year, for the third time in event history, a true American icon, Jack Nicklaus, has joined Folds of Honor as honorary chairman of the non-profit’s leading annual fundraising event, Patriot Golf Day. Since 2007, PGA professionals around the country have raised more than 22 million dollars for educational scholarships for children and spouses of men and women who have fallen or been disabled while serving the country.

Former F-16 military pilot, and Folds of Honor founder, Major Dan Rooney, relies on the continued support from organizations and individuals like Mr. Nicklaus to support the recipients of Folds of Honor. “It is because of people like Mr. Jack Nicklaus that Folds of Honor continues to strive since its founding ten years ago,” said Major Dan Rooney. “Every year we are overwhelmed by the generosity and support for our cause. We could not advance our mission without the golf community and supporters around the nation.”

Open to golfers across the country in 41 PGA sections and in all 50 states, Patriot Golf Day will take place from September 1-4, 2017. Throughout the weekend, golfers who play at participating courses will be asked to add one extra dollar to their green fees to support Folds of Honor’s scholarship program, which has awarded more than 16,000 scholarships since its inception in 2007. In 2016, Patriot Golf Day raised $6.1 million for educational scholarships.

The Golden Bear has been a long-time supporter of efforts aimed at helping our servicemen and women, including American Lake Veterans Golf Course (alvetsgolfcourse.com and veterangolf.org). American Lake, located outside Tacoma, Wash., is the only course in America designed specifically for the use of wounded and disabled veterans. The existing nine holes at the 60-year-old course had become a respite for soldiers looking to recreate and rehabilitate, and use the healing powers of golf to transition back into the mainstream of life. The nine holes could not accommodate the incredible demand by the veterans and their families, so after a phone call from friend, Ryder Cup teammate and American Lake supporter Ken Still, Jack Nicklaus quickly donated his design services to expand the layout to 18 holes. When the new nine was opened in June of 2016, American Lake fittingly became the 400th golf course Nicklaus Design has created worldwide.

“I am honored to be named the Chairman for this year’s Patriot Golf Day,” Nicklaus said. “I never had the privilege to serve our great nation, but I am passionate and committed to any initiative that allows us to recognize, assist and support the men and women of our military, who have sacrificed so much for our freedom. When we can use the game of golf as the vehicle to give back, it becomes even more meaningful to me. That’s why I feel blessed to be involved with projects like American Lake Veterans Golf Course, or partnering with great organizations like Folds of Honor and the PGA of America, with its PGA HOPE program.”

During Labor Day weekend, participating golf facilities around the country host special events, tournaments, and ask golfers to donate at least one additional dollar to their greens fee. Non-golfers can also participate by making a donation to the foundation at its web site, foldsofhonor.org.

Rooney founded Folds of Honor in 2007, following his second of three tours of duty in Iraq. After returning from his second tour, Major Rooney witnessed a profound display of a family’s grief as they welcomed home the remains of Corporal Brock Bucklin. Inspired by this tragic homecoming of a fallen American soldier, Rooney started Folds of Honor to provide support to military families in the aftermath of their tragedies.

For more information or to donate in support of a Folds of Honor scholarship, visit www.foldsofhonor.org.