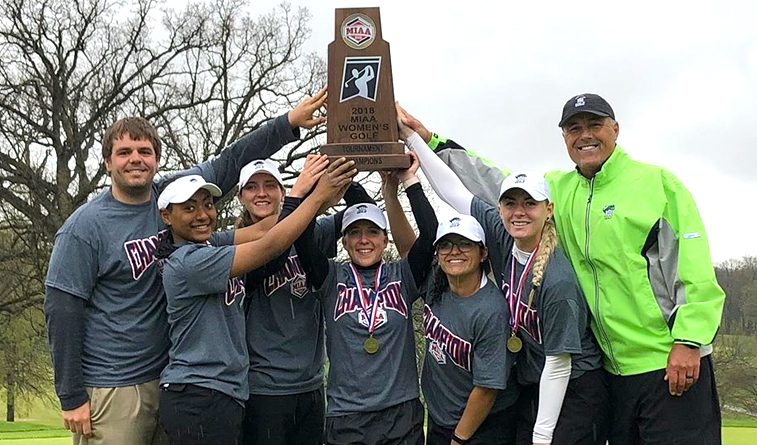 NSU junior Ebba Moberg brought home the team title by paring on the final three holes to hold off Lindenwood by one stroke with a 957 (319-317-321).

The RiverHawks entered the final round with a comfortable ten shot lead but a furious charge by Lindenwood with a tournament low 310 brought the race closer.

Wednesday’s conference title is the eighth for Northeastern State under the guidance of head coach Scott Varner.

By virtue of winning the MIAA Championship, the RiverHawks will receive an automatic qualifier to the NCAA Central Super Regional which will be held on May 7-9 at the Missouri Bluffs Golf Club in St. Charles, Mo.

A final-round rally short for Central Oklahoma and the Bronchos finished third. UCO entered the day 10 shots behind Northeastern State, but pulled even midway through the back nine before struggling down the stretch as the RiverHawks regained the lead and went on to claim the title.

The Bronchos were third at 964 in the nine-team tournament, following by Missouri Western (965) and Central Missouri (985).

Marla Souvannasing led UCO with a final-round 77, while Yuna Sato had a 79.  Makena Mucciaccio shot 80, Sydney Roberts 82 and J.T. Neuzil 92.

The Bronchos had three individuals place in the top 10.  Sato tied for sixth with a 239 total, Souvannasing was ninth at 240 – giving her four top-10 finishes in the league tourney — and Mucciaccio tied for 10th at 241.

Souvannasing offset two front-nine bogeys with birdies on Nos. 1 and 5 in shooting an even-par 36, but made five bogeys on the closing nine for a 41.

Sato birdied the par-5 ninth hole to make the turn at one-over 37 and was two-over after 12 holes before making two bogeys and a triple bogey down the stretch for a back-nine 42.

UCO now awaits word on selection for the NCAA Division II national tournament, though the Bronchos are expected to receive an at-large bid into the Central Regional.