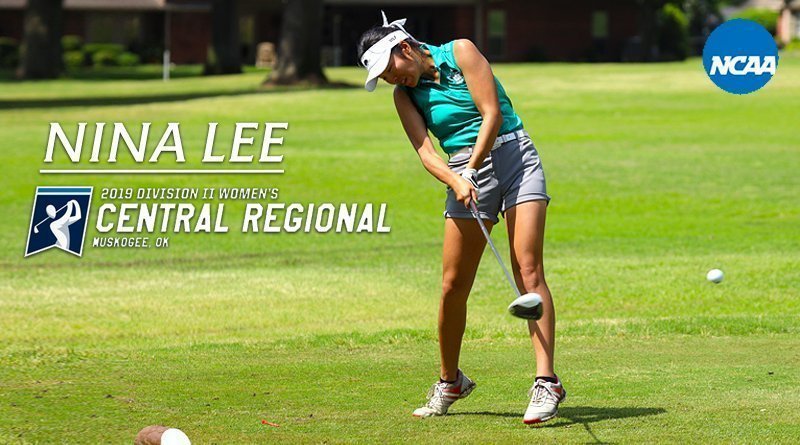 MUSKOGEE – Freshman Aitana Hernandez paced the RiverHawks to a second place finish after the first round play at the NCAA Central Regional.   Northeastern State shot a 302 with Hernandez firing off a 72 and sits in second at the Muskogee Golf Club.

The RiverHawks held the lead for a better part of the day until Arkansas Tech overtook them in the final three pins.  The Golden Suns will head into Tuesday’s round with a three-stroke lead.

More importantly, NSU is nine strokes ahead of the cutline to the NCAA National Championship, which will be held in Palm Beach, Fla. next week.   The top four teams after play advance.

Nina Lee shot the RiverHawks’ second lowest score with a 74 and is tied for fourth.  Lexi Armon and Kelsey Lumpkin both had matching 78s and are tied for 21st.  Ebba Moberg rounded out NSU’s group with an 81 and is tied for 40th.

Arkansas Tech’s Peerada Piddon is the medalist leader with the lone under-par score, scoring a 70.

Southwestern Oklahoma (305) and Lindenwood (305) rounded out the top-4.  Central Oklahoma and Central Missouri are tied for fifth carding a 312.

With a pair of individuals in the top ten, SWOSU sits third as a team. Gloria Choi is alone in second place after firing a round of 2-over par, needing 73 strokes to maneuver the course at Muskogee Golf Club. Elin Wahlin was two shots behind at four-over par, while Chloe Thackeray (78) and Jenna Eidem (79) rounded out the scoring and had SWOSU at 21-over par as a team.

Mucciaccio bogeyed three of the first five holes before playing the last four holes of the front nine even-par in making the turn at 39.  The senior dropped to six-over after double bogeying No. 12, but was one-under over the last six holes in coming back with a 37.

O’Dell had a front-nine 39 and then double bogeyed No. 10 to drop to five-over.  The freshman dropped only one shot to par the rest of the way in rebounding with a 38.

Mucciaccio is tied for 12th and O’Dell is tied for 17th in the individual standings.The threat of inclement weather on Wednesday in Muskogee has forced the regional to be condensed to two days, with the teams taking the course on Tuesday at 8:30 am for the first of two rounds. At the conclusion of the third round, the top four teams and top four individuals on a non-advancing team will qualify for the NCAA Division II National Championships.