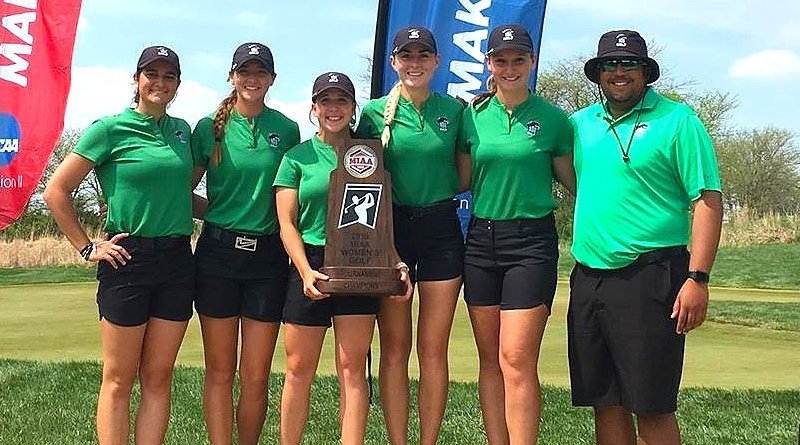 MAYETTA, Kan. – Northeastern State rallied from nine strokes back to solidify a conference dynasty with their fourth straight MIAA Championship on Wednesday. The University of Central Oklahoma moved up to third place.

A hot start with ten birdies on the front nine pulled the RiverHawks nearly back even with Central Missouri.

The race remained neck-and-neck until NSU shot 7-under on holes  14 through 16 to pull ahead. Freshman golfers Amber Bruins and Aitana Hernandez were key to the team’s success with both having three birdies during that run.

With a six-stroke lead heading into the final pin, Central Missouri cut into NSU’s advantage by half but ran out of time.

The RiverHawks fired a tournament low 293 in the final round and 902 after 54 holes.

Northeastern State will see its season continue at the NCAA Central Regional on May 6-8 at the Muskogee Country Club.

The Bronchos had their lowest round of the year, closing with a 295 to end the three-day, 54-hole tournament at the 5,900-yard, par-72 Firekeeper Golf Course with a 920 total.  UCO was fifth after Monday’s first-round 319, went to fourth after shooting 306 Tuesday and then moved up another spot with the strong finish.

The Bronchos are expected to receive an at-large bid when those are released early next week.

“I’m really proud of the way we bounced back after getting off to such a poor start in the tournament,” head coach Michael Bond said.  “We really struggled the first nine holes on Monday and then played the last 45 holes like we know how.”

Roberts and Sato led the strong final-day finish for UCO, with Madison O’Dell adding a 75, Makena Mucciaccio a 76 and Faith Stewart an 82.

Roberts bogeyed her first hole in the final round, but quickly got that back with a birdie on the par-4 second and then closed with seven straight pars to make the turn at 36.  The junior opened the back nine with three pars, birdied the par-3 13th to get to one-under and gave that back with a bogey on No. 16 before finishing with two more pars for a back-nine 36.

Roberts tied for third in the individual standings with a 222 total.

O’Dell started her round with seven straight pars and then double bogeyed No. 8 in making the turn at two-over 38.  She had a pair of back-nine birdies in coming back with a 37 for the 75.