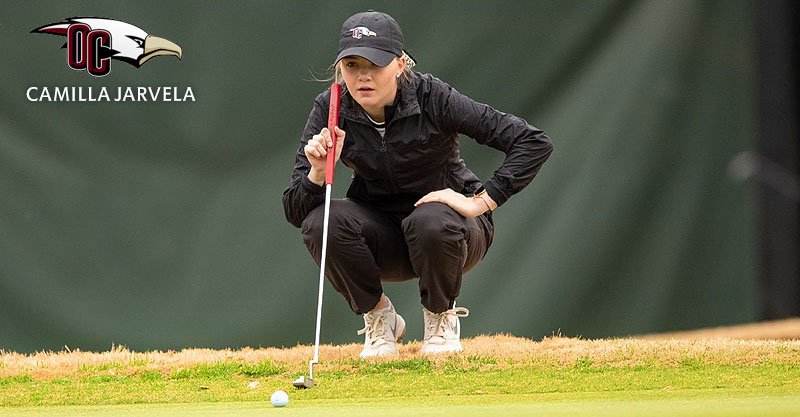 ARLINGTON, Texas (April 12, 2021) – On a day when much of its competition posted low scores at Texas Rangers Golf Club, Oklahoma Christian did not and that put the Eagles in a bit of a hole after Monday’s opening round of the Lone Star Conference Championship tournament.

No. 17-ranked OC posted a team score of 299 on the 6,006-yard course. That’s certainly not a bad score, but it left the Eagles in seventh place in the 15-team field, behind a host of quality squads.

The good news for the Eagles is they have two rounds to potentially make up the gap as they look to secure a bid to the NCAA Division II West Super Regional. OC entered the tournament with an unbeaten record this season against all LSC teams except Dallas Baptist.

Freshman Camilla Jarvela of Espoo, Finland, was OC’s only player to shoot par or better on Monday, posting an even-par 72 that included three birdies. That put her in a tie for 16th in the 74-woman field.

OC senior Abigail Rigsby of Courtenay, British Columbia – a first-team All-LSC selection – birdied her first two holes and finished with four birdies en route to 74, which was good for a tie for 24th. Freshman Wilma Merenmies had two early birdies but also a quadruple bogey at No. 8. Her 76 had her in a tie for 33rd.

Junior Shaley Goad of Wheeler, Texas, led OC in birdies with five during a roller-coaster of a round that also included six bogeys and two double bogeys. She finished at 77 and was tied for 37th. Sophomore Alexandria Bennett, who made the All-LSC second-team list, posted a 78 and was tied for 41st.

The Eagles will start Tuesday’s round at 10:10 a.m. and will again be grouped with Angelo State (Texas) and Texas-Tyler.