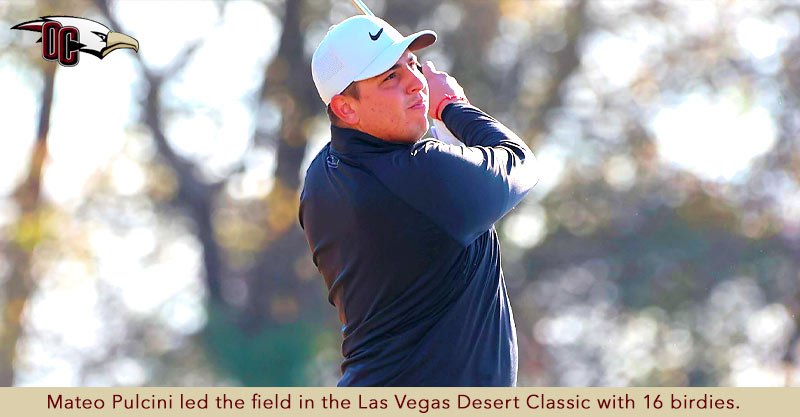 LAS VEGAS (March 8, 2022) – There really wasn’t any doubt Oklahoma Christian belongs among the elite in NCAA Division II men’s golf, but the Eagles nonetheless offered proof with a grinding performance in a tournament with one of the deepest fields in the division.

Led by a 2-under-par 70 from individual runner-up Mateo Pulcini, No. 8-ranked OC posted its best team round of the tournament – a 290 – to seal a third-place finish in the Las Vegas Desert Classic, which ended Tuesday at The Legacy Golf Club.

The Eagles threatened to win the title in an event that included seven teams currently ranked in Division II’s coaches’ poll and three others who received votes in the most recent poll. OC closed what had been a seven-shot gap entering the round to three strokes before tournament host Missouri-St. Louis held on for the team win.

UMSL finished the three-day event at 873, with No. 20 Florida Southern surging into second at 874 and OC at 876. Among the teams finishing behind the Eagles: No. 2 Arkansas Tech (the defending national champion), No. 7 West Florida, No. 10 Central Missouri, No. 23 Colorado State-Pueblo and No. 25 Indianapolis (Ind.).

Pulcini, a sophomore from Rio Cuarto, Argentina, rolled in five birdies on the 7,110-yard course on Tuesday, putting him in sole possession of second place in the 96-man field at 214 (2-under). Pulcini’s 16 birdies over three rounds were the most by any player in the tournament, three more than medalist Kittiphong Phaithuncharoensuk of Texas A&M-Commerce, who won with a score of 209 (7-under).

Two other OC players, freshman Exequiel Rodriguez of Buenos Aires, Argentina, and junior Alejandro Armijo of Rio Rancho, N.M., topped the field with 38 and 37 pars, respectively, which showed in their final scores. Armijo tied for 18th at 220 (4-over) after a final-round 73, while Rodriguez tied for 25th at 222 after shooting a 75.

Freshman Oskari Nikku of Tuusula, Finland – making his first start for OC’s A team – posted his best round of the tournament, a 72 with five birdies, to move into a tie for 35th at 224. Senior Andres Brictson of Merida, Mexico (81) tied for 54th at 229.

OC will return home to host the Oak Tree Invitational next Monday and Tuesday on Oak Tree Country Club’s East Course in Edmond. It will be the first tournament the Eagles have hosted at a local course since the fall 2011 season.