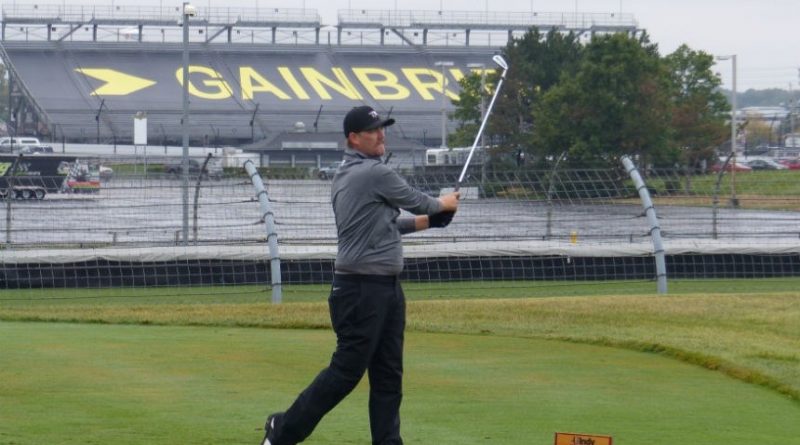 SPEEDWAY, Ind. (Sept. 28, 2020) – In auto racing terms – appropriate because of the venue – Oklahoma Christian quickly got shuffled back in the field on the opening day of the Brickyard Invitational.

The Eagles struggled with the conditions in the opening round on Monday at Brickyard Crossing Golf Course and weren’t able to make up ground even after the weather improved for the second round. With team rounds of 304 and 295, the Eagles’ overall total of 599 put them sixth in the 12-team field, 31 shots behind the leader and tournament host, Indianapolis (Ind.).

Indianapolis holds a three-shot lead over Findlay (Ohio) and a 13-shot advantage over third-place Lee (Tenn.). Tiffin (Ohio) at 594 and Missouri-St. Louis at 596 also were ahead of OC.

The venue is one of the more unique courses on which OC ever has played, as Brickyard Crossing is adjacent to Indianapolis Motor Speedway (home of the famed Indianapolis 500) and has four holes located in the IMS infield.

It’s also a long course at 7,180 yards that was made longer by light rain that fell intermittently throughout the first round, sometimes sideways. Combined with temperatures in the mid 50s, it made for chilly, soggy playing conditions until the rain let up and the clouds broke about an hour into the second round.

No OC player shot par or better in the first round, although senior Trevor Norby of Carlsbad, Calif., came close, posting a 1-over-par 73. He was at 2-under and without a bogey in his second round but then closed with two bogeys to finish the round at even par. At 1-over 145 for the tournament, he was tied for eighth in the 71-man field, nine shots behind the leader, Keegan Bronnenberg of Indianapolis.

Alejandro Armijo of Rio Rancho, N.M., provided the Eagles with a highlight, birdieing the par-5 No. 4 – his final hole – to complete a 1-under 71 in the second round. Combined with his first-round 77, Armijo was at 148, tied for 15th.

Playing as an individual, Mateo Pulcini of Rio Cuarto, Argentina, posted a 79 in the first round but improved to 72 in the second round. He was tied for 29th at 151.

The Eagles will tee off starting at 9:09 a.m. EST (8:09 a.m. CST) for the final round on Tuesday and will be grouped with Tiffin and UMSL.