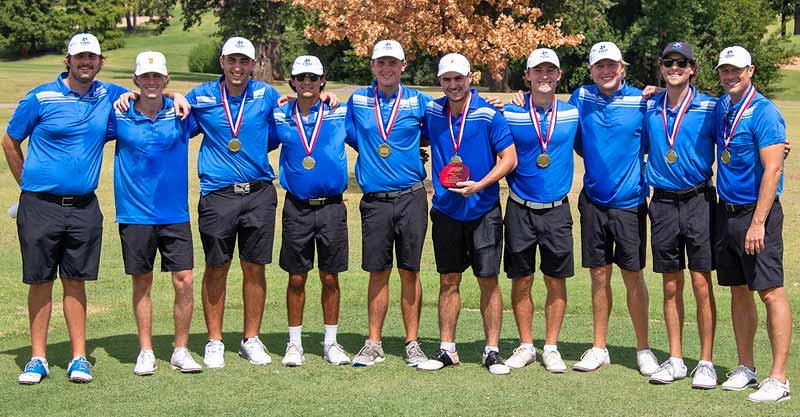 Oklahoma City’s Will Fore took the individual title. The Stars, ranked 11th in NAIA men’s golf, forged the finest round by an OCU team and overcame an 11-shot deficit through the first round of the tournament Monday.

Southwestern Christian, led by the 10-under second-place finish of Stetson Provence (68-64), finished alone in third place, five shots behind the leaders. Provence is a transfer from Western Texas College. The Southwestern College B Team tied for fifth in the tournament as Tristen Schwim tied for 10th individually.

Oklahoma City’s second-round 261 topped the previous low round of 263 recorded March 19, 2018 in the second round of the Battle at the Primm at the Primm Valley Golf Club in Primm, Nev. OCU matched the best round against par of 23 shots under par, which the Stars originally shot in the first round of the Oklahoma Baptist Spring Invitational on April 7-8, 2014 at John Conrad Golf Course in Midwest City, Okla.

OCU collected the team title for the 18th time overall and eighth time in nine years in tournament history.

“That was a great comeback,” OCU coach Andy Crabtree said. “I’m proud of the team for not giving up. They showed they are a great team. I’m looking forward to what they can do later in the season. It’s a heck of an accomplishment. Bellevue is going to be a good team, and we did this without our returning all-American.”

Fore, a senior from Southlake, Texas, pulled off the first individual crown of his college career. Fore’s previous best finish of a tie for second place came in the Las Vegas Shootout on Feb. 21-22 in Boulder City, Nev. Fore boasted of the top score of the tournament with a 65-63–128, finishing four strokes ahead of Southwestern Christian’s Stetson Provence.

Fore downed 17 birdies, including five on the back nine of the course. Fore buried an eagle on the par-5, 527-yard 13th hole. He limited himself to two bogeys among the tournament’s 36 holes. Fore’s total ranks No. 2 in OCU history behind Tyrone Van Aswegen’s two-round score (65-62–127) shot March 29-30, 2004 in the River Oaks Intercollegiate at River Oaks Country Club in Edmond, Okla.

“Will Fore is our co-captain, and he took on a leadership role with his play,” Crabtree said.

Leandro Mihaich gave the Stars two golfers in the tournament’s top 10. Mihaich, a freshman from Córdoba, Argentina, had a tie for seventh with a 71-65–136. Mihaich knocked down nine birdies.

The Stars compete next in the Southwestern Christian Invitational on Sept. 6-7 at Lake Hefner Golf Course in Oklahoma City.