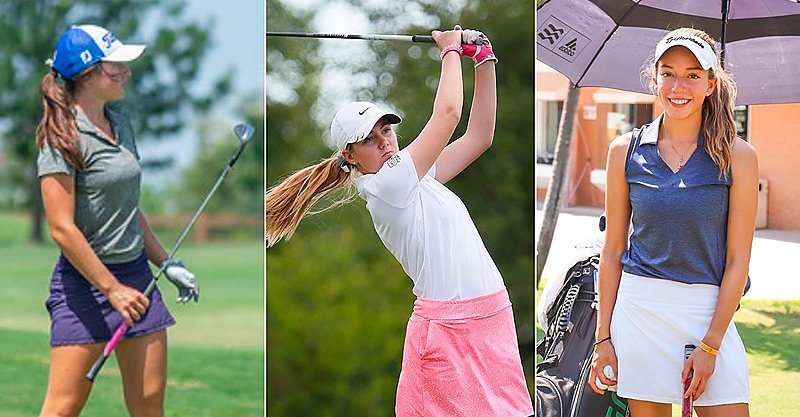 Signing with the Eagles this month were Haley Blevins of Madison, Ala., who plays for Edmond North High School; Sarah Sherrard of Moore, who plays for Christian Heritage Academy in Del City; and Sofia Benevides Herberth of San Luis Potosi, Mexico.

Blevins has won 16 of her 20 Alabama Junior Golf Association events since 2016, never finishing lower than second in any event on that tour. Overall, she’s won 29 tournaments as a junior player and once finished fifth in the European Junior Championship, played in Scotland. She won in her first appearance for Edmond North this past spring before the remainder of the season was cancelled due to the COVID-19 outbreak.

“Haley was brought to my attention by local teaching pro Stan Ball,” Lynn said. “Haley had just moved to Edmond and only played in one tournament for Edmond North. She was not in the Oklahoma junior tournaments but was competing in Texas. After seeing her scores from those events and learning about how hard she worked, it was a very easy decision to recruit Haley and we’re looking forward to her success.”

Sherrard has won 18 times on the PGA South Central Section Junior Golf Tour since 2014. She finished third as a sophomore in the 2019 Class 2A state tournament, played at Aqua Canyon Golf Course in Guthrie, after placing eighth as a freshman. Lynn said he was impressed with Sherrard’s dedication in recent months to adding strength – and thus length – in an effort to improve her game.

“When she started working out to get stronger, she gained distance and dropped her scoring average six shots,” Lynn said. “The results are impressive, but more impressive is the effort she put in to make the changes. At that point, we wanted her to be an Eagle.”

Benavides had three top-20 finishes this past September and October on the American Junior Golf Association Tour and represented Mexico in the 2017 Teen Van Horn Cup. She also recorded multiple high finishes in tournaments in her native country.

“Sofia is extremely talented, playing many major tournaments and achieving a very good scoring average,” Lynn said. “She has received years of expert instruction and I expect her to be extremely successful at OC. She will be someone to watch.”