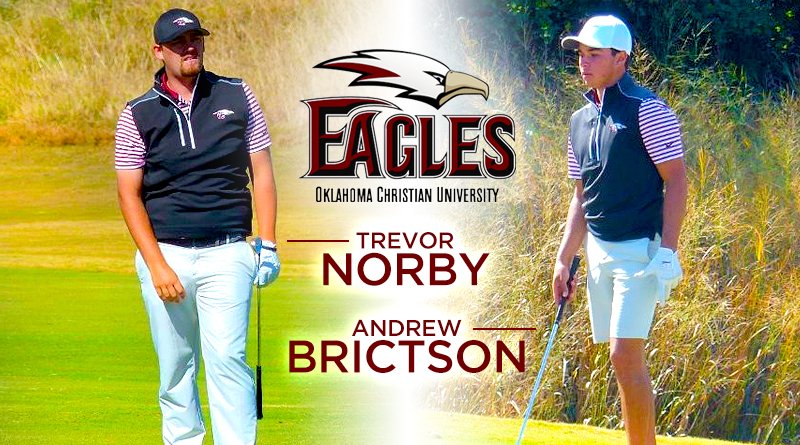 Brictson, a junior from Merida, Mexico, who qualified for last year’s U.S. Amateur Championship, finished the abbreviated season ranked 11th in the region and 45th in NCAA Division II by Golfstat.com.

Over 19 rounds during the 2019-20 campaign, Brictson posted an average score of 72.68 and had four top-10 finishes, including a win in the Ryan Palmer Foundation Invitational at Tascosa Golf Club in Amarillo, Texas. It was his third collegiate win.

Norby, a senior from Carlsbad, Calif. – who earned GCAA All-Region and third-team All-America honors in 2018-19 – ended this season as the region’s top-ranked golfer by Golfstat.com and at No. 11 in Division II.

Norby finished in the top three in five of OC’s seven tournaments this season, winning twice – in the Jerry Hrnciar Invitational at The Territory Golf Club in Duncan and the St. Mary’s Invitational at The Dominion Country Club in San Antonio, raising his career total to four wins. He posted an average score of 71.56 over 18 rounds, 12 of which were even par or better.

“I’m very proud of Trevor and Andres for the seasons they had this year,” OC coach David Lynn said. “They both won golf tournaments individually on the way to leading our team to three wins. Although our season was cut short, I’m extremely excited to have them both back for the 2020-21 season.”

The 12-man All-Region team included eight players from Lone Star Conference schools, but only two schools – No. 11-ranked OC and No. 10-ranked St. Mary’s (Texas) – placed two players on the list.  OC has had at least one All-Region golfer in seven of the eight years the program has competed at the NCAA Division II level.

In their six tournaments against Division II competition, the Eagles won three times, finished second twice and third once. OC posted an 80-4-1 mark in Division II play and didn’t have a losing record against any Division II team, splitting with No. 6 Arkansas Tech, No. 21 Colorado State-Pueblo and California-San Diego while going 3-1 head-to-head against St. Mary’s.

The Eagles, like every other Division II program, had their season suddenly ended last month due to the COVID-19 outbreak.