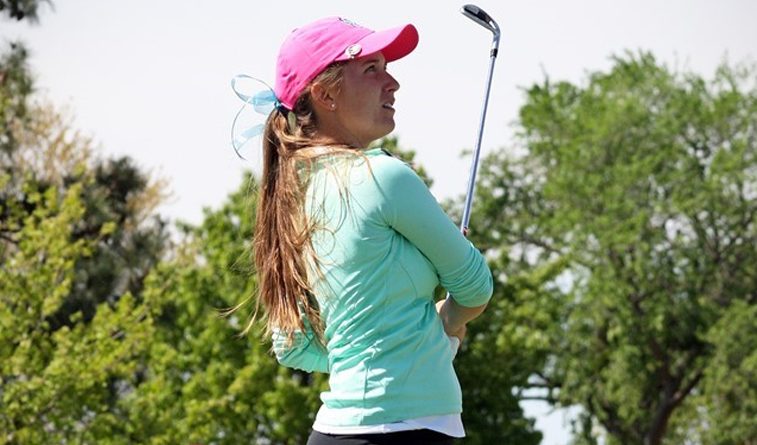 Photo: Melissa Eldredge had finished play through seven holes of the second round Wednesday before rain postponed play.

Oklahoma City posted a first-round score of 306 and paced the field at 20 shots over par. After the full first round results were in, fifth-rated Dalton State (Ga.) stood in second place with a 315. At the point play had been halted, eighth-ranked South Carolina Beaufort took over second at 29 shots above par as a team.

Conditions started with 77-degree temperatures and 7 mph winds. The wind picked up to 21 mph with 36 mph wind gusts, and the temperature climbed to 90 degrees Wednesday. The area forecast calls for an 80 percent chance of rain Thursday.

Four holes into their second round, OCU’s Anna Mikish and Savannah Moody shared second place at four strokes over par. Caroline Goodin of the Stars had a piece of fourth place at six shots over par. Indiana Tech’s Courtney Dye topped the field with a one over par score through four holes in the second round.

Oklahoma City’s Kailey Campbell and Melissa Eldredge had finished seven holes of their second round. Campbell tied for 20th place at 10 over par, while Eldredge tied for 12th with eight strokes over par.