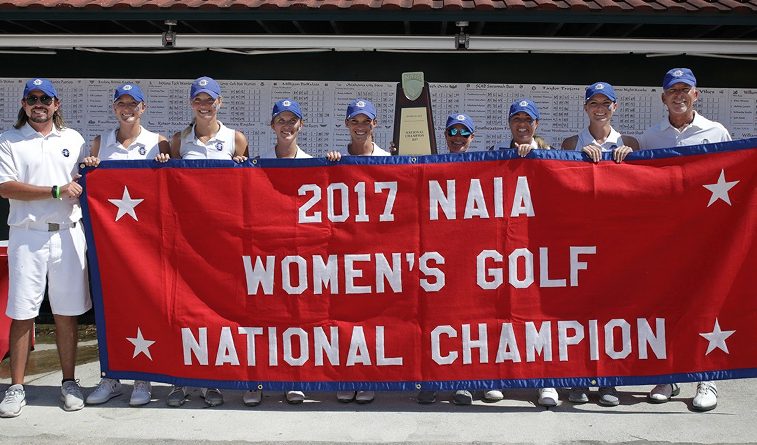 Oklahoma City secured its 65th national championship in all sports. The Stars took their third national crown of 2016-17 after winning the NAIA women’s basketball and competitive cheerleading titles in March. OCU has won a national crown each year since 1993-94.

“I cannot put into words how proud I am of this group,” Oklahoma City coach Marty McCauley said. “All nine of them have been selfless all season and have without a doubt earned this national championship. They earned it through their dedication to one another and to the common goal of returning home with another national championship.”

Melissa Eldredge, Anna Mikish and Savannah Moody of OCU clinched all-tournament accolades by finishing among the top 15 individuals. Mikish, a senior from Choctaw, Okla., spearheaded the Stars with a 76-76-77–229 to tie for sixth place. Mikish made par on 14 holes Friday and topped the field with 40 par scores during the tournament. Mikish ended up seven strokes behind the tournament champion Courtney Dye from Indiana Tech.

The Stars featured a senior-laden team with five among a group of nine golfers. Campbell, Goodin, Mikish, Raegan Barnes and Katie-Lee Wilson were on OCU’s last national title team as freshmen.

“It’s truly been an unforgettable four years with everyone,” Goodin said. “This national championship didn’t come easy. There were a lot of highs and lows all season.

“We wouldn’t have gotten to this national championship win without trusting each other. When I had a rough second round, I knew my team had my back. And when others had rough holes, I knew that I was covering for them. I can’t imagine sealing my senior year with a victory with anyone else.”

McCauley has led OCU to three national titles in seven seasons as head coach. McCauley became NAIA coach of the year for the third time.

“I think what put us ahead was our focused final two weeks of practice to simulate the tournament setting,” Goodin said. “That really made a difference. Coach helped us set up the courses at home similar to what we’d see at PGA National.”

The competitors played under scattered clouds with temperatures that started at 73 degrees then climbed to 83 by the afternoon. The wind blew between 8-12 mph. Rain fell during the first three days of the tournament, eliminating one round of the event.

“I think today’s round went great,” McCauley said. “The course was set up difficult for a final round as you would expect for a national championship. I can’t say how proud I am of my girls for handling the challenges they faced.”

Earlier, it was announced that Goodin, Wilson and Emma Allen were named NAIA scholar-athlete honors for their performances in the classroom this season.

Wilson took home the honor for the third time in her career while Goodin garnered the acclaim for the second straight season.

In 2016-17, Wilson had a perfect 4.0 cumulative grade-point average while finishing up her degree in exercise science. She has an average score of 83.67 per 18 holes this season and recorded a 12th-place finish in the Sooner Athletic Conference Championships. Wilson is also a two-time CoSIDA academic all-American, three-time academic all-district and three-time academic all-SAC selection.

Goodin finished with a 3.95 GPA while majoring in accounting. She has four top-10 finishes on the season, including an individual title at the O-City Spring Classic and a third-place finish in the SAC Championships. Goodin has posted a 76.57 stroke average this season. Goodin is also the 2015-16 and ’16-17 Jim Wade Award winner as the top female student-athlete at OCU.

Allen, a junior from Broken Arrow, Okla., grabbed scholar-athlete honors for the first time in her career. She accumulated a 3.74 GPA studying marketing. Through 15 rounds this season, Allen has turned in a 79.20 scoring average with an individual title in the Claud Jacobs Invitational.

In order to be nominated by an institution’s head coach or sports information director, a student-athlete must maintain a minimum grade point average of 3.5 on a 4.0 scale and must have achieved junior academic status.