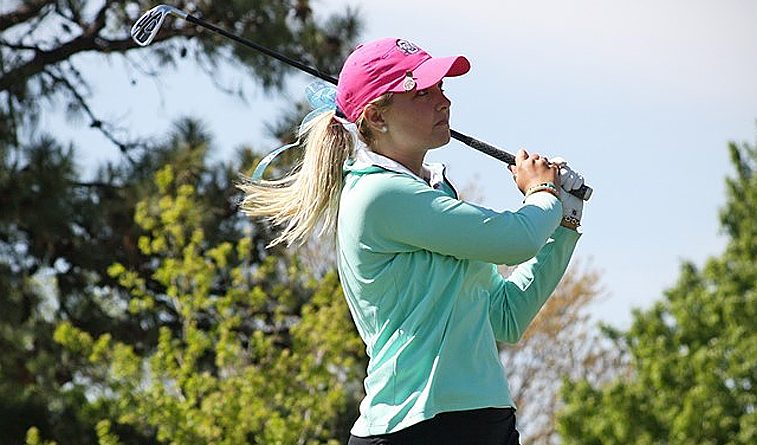 Photo: Savannah Moody has made par 27 times to lead the tournament.

Third-ranked Oklahoma City recorded a 308-312–620 after finishing the second round Thursday evening. The tournament has been shortened to 54 holes with the final round set for 6:30 a.m. CDT Friday.

Golfers resumed play in the second round after an hour delay Thursday morning due to lightning in the area. Later in the morning, rain delayed play for six hours and 30 minutes. Play picked up at 4:30 p.m. CDT Thursday where players completed the second round. The weather is expected to be clear Friday with a 10 percent chance of rain.

The Stars topped the field with 112 pars made. OCU’s Savannah Moody paced the field with 27 par scores, and Anna Mikish came up with par 26 times. Mikish, a senior from Choctaw, Okla., stood two strokes off the pace with a 74-76–150, which tied for fifth place.

Moody, a junior from Aledo, Texas, carded a 76-78–154 to have a share of 10th place. Melissa Eldredge supplied OCU with a 78-79–157 to tie for 17th place. Eldredge, a freshman from Eufaula, Okla., has converted four birdies in the tournament.

Eighth-ranked South Carolina Beaufort came in second through 36 holes with a 316-307–623. Jessica Williams of Embry-Riddle (Ariz.), Kaitlyn Riley from Cumberlands (Ky.) and Tia Teiniketo of Dalton State (Ga.) shared the individual lead. Indiana Tech’s Courtney Dye trailed the leaders by a shot in fourth place, while Natalie Ugalde of Wayland Baptist (Texas) had a piece of fifth alongside Mikish.