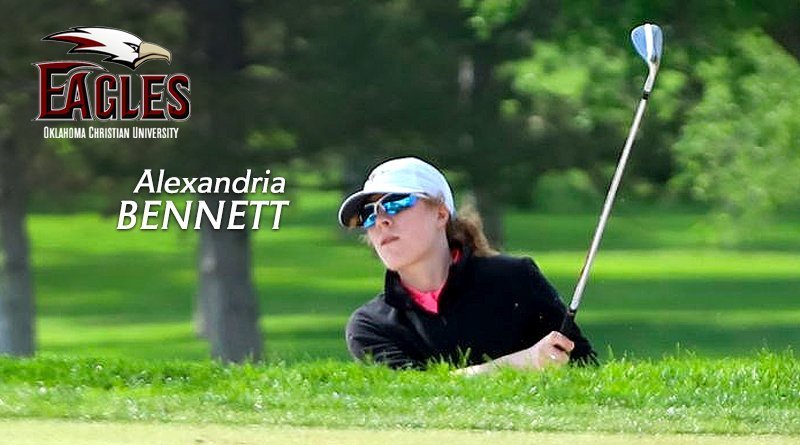 Photo: OC freshman Alexandria Bennett watches a chip shot during Monday’s round in the West Super Regional. She had one of OC’s three birdies on the day.

AMARILLO, Texas (May 6, 2019) – On a day birdies proved elusive for Oklahoma Christian – and for most everyone else in the NCAA Division II West Super Regional – the Eagles understood par also was a good score and took advantage.

OC topped the elite 12-team field in pars with 58 on Monday, allowing the 18th-ranked Eagles to end the first round in the lead with a team score of 301, good for a two-shot lead over a fellow Heartland Conference team, No. 2 Dallas Baptist (Texas), at Amarillo Country Club.

Not far behind were No. 8 West Texas A&M and No. 16 Academy of Art (Calif.), tied for third at 305, Simon Fraser (British Columbia) at 309 and No. 4 California State-San Marcos at 310. The top four teams in the 54-hole golf tournament, along with the top three players not on one of those teams, will qualify for the Division II Championship, set for May 15-18 at PGA National Resort’s Champions Course in Palm Beach Gardens, Fla.

Making its first Super Regional appearance since 2016, OC managed only three birdies – one each by Kate Goodwin, Abigail Rigsby and Alexandria Bennett. But they also avoided big scores, as none of the four players whose scores counted toward the team total – Goodwin, Rigsby, Shaley Goad and Elizabeth Freeman – had anything worse than a bogey.

That steady play allowed the Eagles to move into the lead about midway through their round and hold it until they finished. OC’s 301 team score was right at its season scoring average of 301.09 per round.

Goad, a sophomore from nearby Wheeler, Texas, led the Eagles individually with a 3-over-par 74 on the 6,436-yard course. That put her in a tie for fifth in the 66-woman field, five shots behind Dallas Baptist’s Ann Parmerter.