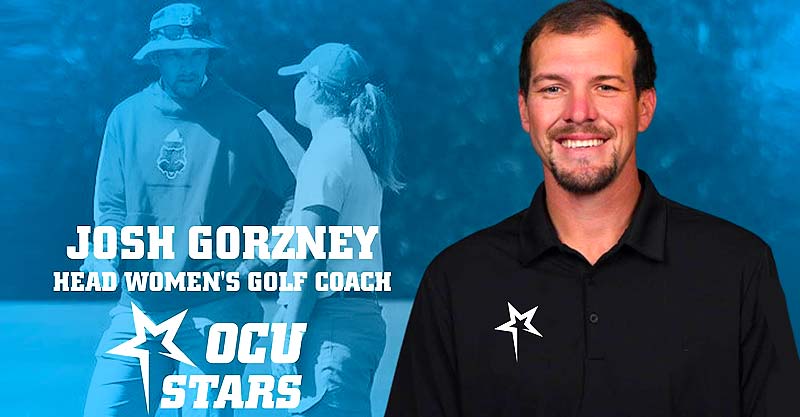 Gorzney joins the Stars after serving as assistant women’s golf coach at Arkansas State. He also coached golf on the high-school level in Oklahoma, and he has experience as a professional at multiple prestigious golf courses.

Gorzney replaces Marty McCauley who was dismissed in the middle of the fall season.

“I am excited to announce that Josh Gorzney will be the next head women’s golf coach at OCU,” said Corey Bray, Director of Athletics at Oklahoma City. “His experience as an accomplished golfer, assistant golf professional and coach at the high school and collegiate levels will provide an outstanding foundation for his leadership of our women’s golf program. Under Josh’s guidance, there is no doubt that the program will continue to excel in the classroom, in the community and in competition. Please join me in welcoming Josh to the OCU athletics family.”

“I’m excited for the opportunity to lead this team,” Gorzney said. “We will work to hold high standards in the classroom, on the golf course and in the community. Thank you to Corey Bray and the search committee for their belief in me. I cannot wait to be a part of the OCU family.”

Gorzney previously had a two-year stint as head boys golf coach at Norman (Okla.) North High School. Gorzney guided Norman North to the state tournament and a second-place regional finish. He also coached the individual regional champion. Prior to that, Gorzney was assistant boys golf coach at Edmond North High School for the 2018-19 season. He coached the Class 6A Oklahoma golf individual champion, Jordan Wilson.

He spent two seasons as assistant men’s golf coach at Aurora University (Ill.), helping the squad to the 2018 Northern Athletics Collegiate Conference title and coached three all-conference players that season. He served as volunteer assistant coach at South Mountain Community College (Ariz.) for the 2015-16 campaign and helped that squad to the 2016 NJCAA Division II National Championship.