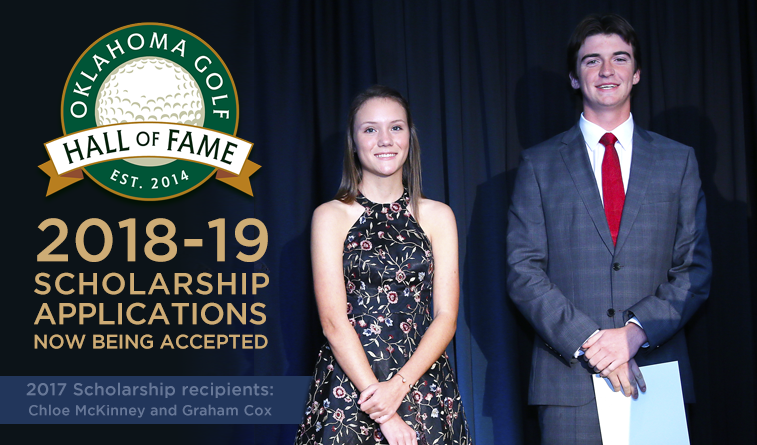 The Oklahoma Golf Hall of Fame announced it will again award two $5,000 scholarships in 2018, one to a male and one to a female.

Previous recipients are not eligible.

The specifics of the criteria and the application form for the Hall of Fame scholarships are both available at www.oklahomagolfhof.org. The recipients must have an interest in and relationship with the sport of golf, though not necessarily as a member of a competitive team.

Winners will be announced no later than June 1, 2018 and will also be honored at the Hall of Fame Classic fundraising golf tournament tentatively scheduled July 16 at Oak Tree National. The next class for the Hall of Fame will be inducted in 2019.

The initial recipients of the Hall of Fame scholarships in 2016 were Hadley Walters and David Trimble, followed by Chloe McKinney and Graham Cox in 2017. The latter two were honored at the 2017 dinner inducting Bob Tway, Doug Tewell, Mark Hayes, Joe Walser Jr. and Ernie Vossler.

“The quality of applicants we receive for the scholarships is amazing and rewarding, but also makes for a very difficult decision,” said incoming Oklahoma Golf Hall of Fame Board Chairman Tom Jones, also President and COO at Oak Tree National. “We look forward to receiving this year’s applications and reading about the remarkable young men and women playing golf across Oklahoma.”