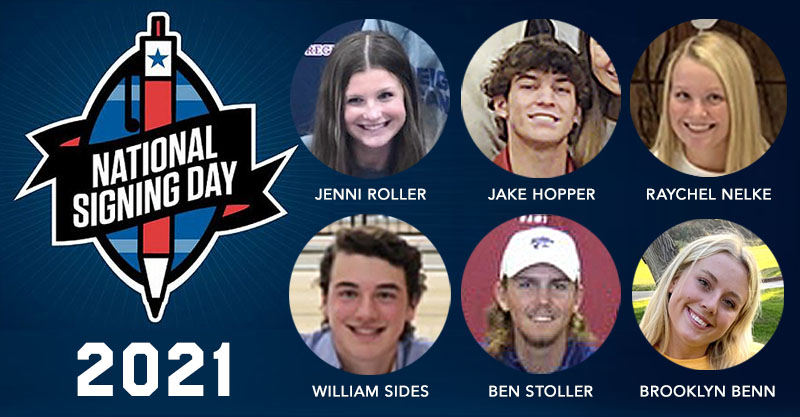 Restoring, sustaining and creating new legacies are all part of the motivation for Oklahoma’s top junior players in choosing where to continue their golf careers at the collegiate level.

For Regent Prep’s Jenni Roller, going to the University of Tulsa, where her mother Maggie was a key contributor to a national championship in 1998, was an easy decision.

“It was a lot to look up to and I want to make her proud,” Jenni said. “We’re the first mother-daughter duo to go to TU and it’s cool that we get to share that together.”

Maggie, now the director of instruction at Cedar Ridge Country Club in Broken Arrow, played for former TU Dale McNamara from 1985-89 when it was one of the top programs in the nation. She started on the 1988 team that won the national championship alongside Melissa McNamara, Kelly Robbins, Blue Kinander and Caryn Louw. TU finished as national runnersup in 1989.

The team now seems to be on the rise again under coach Annie Young and Maggie is excited to see her daughter be a part of it, though she emphasized that she didn’t push in that direction.

“I stayed totally out of it,” Maggie said. “But this is very exciting and I’m so proud of her.”

Jenni won the Class 2A state championship as a freshman and junior (Covid claimed the event in her sophomore year). She is the current OGA Junior State Amateur Champion, has a long list of other accomplishments in AJGA, OJGT (eight wins), PGA and USGA events and is the second ranked junior in Oklahoma behind Raychel Nelke of Pocolo, who signed with the University of Oklahoma today.

“We are very excited to add the top junior golfer in Oklahoma to our roster,” Young said. “Jenni is a great young lady with a ton of upside. She had a very successful summer and I can’t wait to see what the future holds for her at TU.

The Sooners landed one of the top male and female players in the state. Jake Hopper of Norman, a lifelong Sooner fan who came of age cheering for the 2017 OU national championship team, joined the parade of in-state talent that has made its way to Norman.

For the OU women’s team, Nelke has been one of the top-ranked juniors in the state for the past three years and won the WOGA Junior Championship in 2020. She has been a force in both the OJGT and AJGA circuits. She signed Wednesday afternoon to play for coach Veronique Drouin-Luttrell.

“I’ve seen Jake Hopper grow up and I’ve always been excited about what he can do for us,” said OU coach Ryan Hybl. “He loves Oklahoma and I know he will give us everything he has. Jake has experienced success at every level and we can’t wait to be part of his development.”

Hopper is a 5-foot-8, 125-pound lefty with an incredible touch and the ability to get very hot with the putter. He said he plans to spend his senior year getting heavier and stronger and is excited about the chance to join the Sooners. “It’s always been my dream to play there since I first started playing golf,” Hopper said. “I’ve known Drew (OU freshman Drew Goodman) and Jaxon (redshirt freshman Jaxon Dowell) for a long time and excited about the chance to play with them. Coach Hybl and Coach Allcorn (assistant coach Bill Allcorn) are the best coaches in the country.”

Two of the best and most decorated state juniors will be leaving the state for their college careers, one north and one south. Will Sides of Cascia Hall signed with Southern Methodist University in Dallas while Ben Stoller of Owasso signed with Kansas State.

Sides, an honorable mention AJGA All-American, finished second by a shot to Tres Hill in the Class 4A state championship as a junior and is the top ranked junior player in the state.

Stoller, who won the rain-shortened Class 6A state championship at Forest Ridge Golf Course, has been near the top of the junior field in Oklahoma since he became eligible for OJGT events and capped his junior career with a playoff victory in the OJGT’s Red River Challenge at WinStar Resort in Thackerville.

It was his 18th OJGT victory since he began playing in the events as a 13-year-old. The choice of Kansas State was preordained before that, as both his parents attended KSU and he has been a rabid Wildcat fan since childhood. He was a star struck standard bearer for former KSU and Edmond North star Robert Streb at The Patriot Cup in Owasso. He introduced himself to K-State golf coach Grant Robbins at a football game as a 10-year-old, confident they would meet again.

“We all bleed purple in my house, but also the coaches there showed me more love than any other school,” Stoller said. “They always said you are our guy.”

Interestingly, Stoller has only won one high school tournament in addition to the Class 6A state championship but finished runnerup eight times. He plans to rectify that this spring then has an ambitious summer of state and national events lined up prior to heading to college.

Among the girls drawing interest from Division I schools, Brooklyn Benn of Edmond has signed with Wichita State while Olivia Coit of Edmond said she will sign with Arkansas State Thursday.  Two frequent OJGT competitors also signed Wednesday, including Grace Kilcrease of Springdale, Ark., with Tulsa, and Kate Tilma of Wichita with Kansas State.

Coit played for Edmond Memorial and has improved constantly, winning the OJGT’s events at Trosper Park and Lake Hefner this fall.  She finished third individually in the Class 6A state championship last spring. The Red Wolves roster includes  junior Olivia Schmidt of Edmond and junior Madison Smith of Moore.

The chart above lists all in-state signings expected today that were communicated to OJGT director Morri Rose. It will be updated as more signings are confirmed.

In addition to Roller, Tulsa announced that it had signed Emily Bohrer from Germany, and Kilcrease.

“I am very excited about the 2022 class,” Young said. “I believe all three girls will make a huge impact on the team from day one. I look forward to working with them and see how much they grow and get better the next four years.

Bohrer, from Ketsch, Germany, is a member of the German Junior National Team in 2021-22. During this past summer, she was on the first-place team at the DMM AK 18 event and finished in seventh place at the MatchPlay Trophy Germany tournament.

A four-time all-conference and all-state selection, Kilcrease played her prep golf at Springdale Har-ber High School. She helped lead her high school team to Class 6A state titles in 2020 and 2021, while earning Arkansas Prep Girls Junior Golfer of the Year honors in both those seasons.

“Grace is a great addition to our program. She is a very competitive person with a ton of drive,” said Young. “She came on very strong this summer as she won multiple AJGA events and qualified for the best junior events in the country. Grace has an unmatched work ethic that will help to make her a great college golfer.”