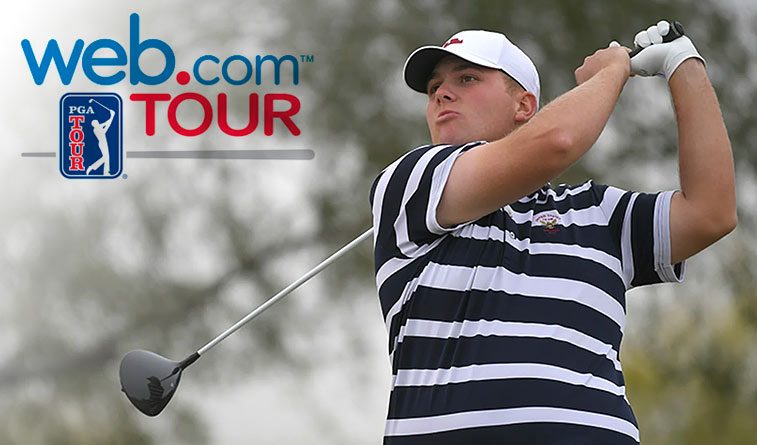 CHANDLER, Ariz. – On a day with intermittent showers throughout, Bryan Bigley and Braden Thornberry shared the lead with opening 10-under 62s at Whirlwind Golf Club at the Final Stage of the Web.com Tour Qualifying Tournament. Both players posted the scores on the Devil’s Claw course, with Andy Zhang (9-under 63) earning the low round on the Cattail course after the first round.

Thornberry, who is competing as an amateur after a record-breaking year at the University of Mississippi, tallied three straight birdies on Nos. 5, 6 and 7 to turn at 3-under 33 before rattling off seven straight birdies (Nos. 11-17) on the back nine to ascend the leaderboard.

It was a day of mixed results for the players in the field with Oklahoma ties. Faring the best was former Oklahoma State star Jordan Niebrugge, tied for 14th at 6-under. A shot back is Nick Heinen of Edmond and OSU at 5-under as well as native Tulsan and former University of Oklahoma player Charlie Saxon.

Blake Trimble and Josh Creel, both Oak Tree National members, shot 3-under and are tied for 66th. Kristoffer Ventura of Oklahoma State is tied for 101st at 1-under. Former Sooners Michael Gellerman and Will Kropp are tied for 115th at even par and former Sooner Grant Hirschman is tied for 125th at 1-over.

The top 40 will earn a minimum of eight starts on the Web.com Tour in 2019. See below for details.

“[During the birdie streak] There was a mix of par-5s and shorter par-4s, and I was able to pick off No. 11 which was actually a pretty hard par-3, but I hit it to the middle and was pretty happy of that,” Thornberry said. “I was hitting it down the middle of every fairway and was getting it up to 10 feet and making it. Hopefully I can keep doing that the rest of the week.”

The 21-year-old is one of the most decorated collegiate players in the country and held the title of the No. 1-ranked amateur in the world for the majority of the 2017-18 season. He won the 2017 NCAA Individual National Championship as well as the 2017 Fred Haskins Award, given to the most outstanding men’s collegiate golfer. He is the first University of Mississippi golfer to claim either title.

Despite the pressures of Final Stage, Thornberry has kept up in school while on the road. On Monday, Thornberry took a final exam in the media center through Skype, and he turned in a final project on Wednesday night before his first round.

“Obviously there’s pressure when you’re playing for something as big as status on the Web.com Tour, but I do feel like I have more to fall back on than maybe other guys out here still being an amateur,” Thornberry said. “Having the option to go back to college, just having my options open gives me a little more relief.”

“It’s two good options – I would be happy at school in the spring, but it would also be cool to be a Web.com Tour member,” Thornberry said. “Either way it’s a good spot to be in.”

After a 2018 season on the Web.com Tour saw 10 made cuts, but just one top-10 finish, 34-year-old Bryan Bigley punctuated his opening round with two birdies on the final two holes. Bigley also enjoyed an impressive stretch of golf, going 8-under over nine holes (Nos. 13-3) to jump up the leaderboard.

Bigley has competed on the Web.com Tour in each of the last three years with a top finish of T6 at the 2018 BMW Charity Pro-Am presented by SYNNEX Corporation.

Zhang went out with a 5-under 31 on the front nine before finishing with a flurry of birdies to post the round of the day on the Cattail course. The University of Florida phenom turned professional on Monday after a strong year at the collegiate level. He won his first collegiate tournament at NCAA Regionals and followed that up by winning the individual title at the SEC Championships.

“SECs were a lot of fun – you have a lot of guys around you and you’re all trying to win, but this is a different feeling trying to make a living out of golf,” Zhang said. “When your job is literally on the line it’s a different kind of pressure.”

* The 72-hole tournament is hosted at Whirlwind Golf Club on the Cattail and Devil’s Claw courses. Whirlwind is serving as the host for the second consecutive year. University of Georgia alum Lee McCoy, who claimed medalist honors at 28-under last year, is in the field this week. The 24-year-old sits T66 after the first round this year with a 3-under 69. Last year’s runner-up, Sungjae Im, went on to win Web.com Tour Player of the Year and set a record by leading the 2018 money list wire-to-wire.

* After a quiet front nine saw him turn at 2-under, Doug Ghim birdied six of his final seven holes to post the second-lowest round of the day on the Cattail course at 8-under 64. Ghim made headlines by making three eagles at the 2018 Masters Tournament en route to finishing as the low amateur.

* Norman Xiong opened with a flawless 7-under 65 on the Cattail course to sit T9 after the first round. The 20-year-old was one of Thornberry’s teammates on the 2017 U.S. Walker Cup Team and racked up collegiate awards over a year and a half at Oregon. He won the Phil Mickelson Award as the top freshman in 2017 before earning the Fred Haskins Award and Jack Nicklaus Award as the most outstanding collegiate player in 2018.

* Two players in the field advanced all the way from the Pre-Qualifying Stage, and they happen to be former teammates. Former Oklahoma State University golfers Kristoffer Ventura and Nick Heinen advanced through each qualifying stage to reach the Final Stage. Just 10 days ago, Ventura endured an emergency appendectomy surgery after waking up and going to the emergency room.

* In 2017, Jimmy Stanger opened with an 8-over 80 before going low the next three days and missing guaranteed starts by one stroke. This year, he improved on his opening round by 13 strokes, turning in a first-round 5-under 67.

* Todd Baek – who finished fifth on PGA TOUR China’s Order of Merit – got into town at 2 a.m. the morning of the first round after flying in from Japan. Baek competed in the first tee time of the day on one hour of sleep and posted a 4-under 68.