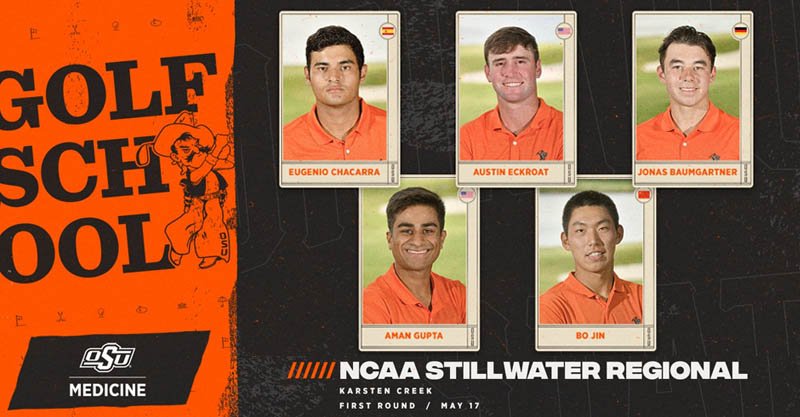 What 2 Watch 4
• Oklahoma State’s men’s golf team will look to add to its NCAA-best total of 14 regional titles when it begins play at the NCAA Stillwater Regional on Monday.
• The 54-hole event will be contested Monday through Wednesday on the Cowboys’ home course, Karsten Creek.
• Spectators are welcome at the event and there will be no admission charge. Parking is available along the road leading into the golf course. Play is slated to begin at 7:30 a.m. each day.
• Thirteen teams and 10 individuals not on those teams will compete at each of three regionals while the other three regionals will have 14 teams and five individuals not on those teams.  The low five teams and the low individual not on those teams from each regional will advance to the finals.

Championship 411
• The Cowboys are coming off a one-shot victory at the Big 12 Championship, their second consecutive league title, on April 28.
• The Cowboys have won two of the three regionals hosted on their home course (2009, 2016).

OSU In NCAA Regional Action
• The Cowboys have 14 NCAA regional titles to their credit, which are six more than any other team in the country.
• The Cowboys have won four consecutive regionals after their victory in 2019 at the Louisville Regional.
• The Cowboys, who have advanced to the NCAA Championship 72 of a possible 73 times, also have 11 regional medalists overall with the most recent being Kristoffer Ventura in 2016 in Stillwater.

Current Cowboys In Regional Play
• Austin Eckroat has competed twice in NCAA Regional play. As a freshman, he finished 19th at the Scarlet Course in 2018. The following year, he finished tied for sixth in Louisville.
• As a member of the Wake Forest squad in 2019, Eugenio Chacarra tied for sixth place at the NCAA Myrtle Beach Regional.

Chip Shots
• The Cowboys are ranked fourth in both the Golfweek/Sagarin Ranking and the Golfstat ranking.
• With its win at the Big 12 Championship, OSU has four victories on the season. The Cowboys enter regional action looking to record their 31st season since 1973-74 with at least five wins.
• Four of those seasons have come under head coach Alan Bratton.
• Former Cowboy All-American Kevin Tway became the first-ever player to win three regional titles with his victories in 2008, 2009 and 2011.