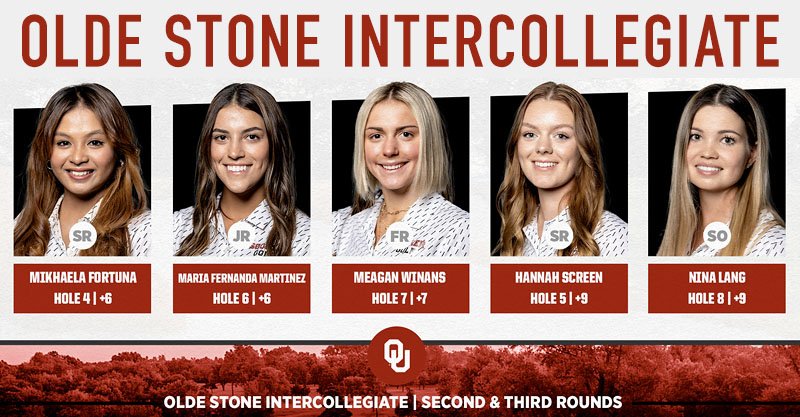 BOWLING GREEN, Ky. – Maria Fernanda Martinez tied for sixth and led the Oklahoma Sooners to a fifth-place finish at the Olde Stone Intercollegiate at The Club at Olde Stone Tuesday.

Fernanda Martinez’ sixth-place finish is the best of her OU career and the first time she placed in the top 10.

“Maria had a great tournament, and I am really proud of her,” said Oklahoma head women’s golf coach Veronique Drouin-Luttrell. “She has been working hard and to see it pay off is always rewarding.”

The field concluded the tournament Tuesday and resumed the second round after darkness suspended play Monday night. When play stopped Monday, the Sooners were in fourth and led by Fernanda Martinez and Mikhaela Fortuna, who were both 6 over.

Fernanda Martinez tallied four birdies in the final round and two birdies in her final three holes to finish with a 7-over 223. The redshirt junior tallied two rounds of 73.

Fortuna finished tied for 20th and played her best round of the tournament to conclude play Tuesday. The senior finished 1-under on the back nine and tallied a pair of birdies on No. 12 and 14. She finished the final round with an even-par 72.

Hannah Screen tied for 22nd with a 12-over 228 and tallied her second career ace on the par-3, 152-yard eighth hole in the second round.

The Sooners concluded their fall campaign in Bowling Green, Ky., and open the spring schedule Feb. 27-28 in Peoria, Ariz., at the Westbrook Invitational.