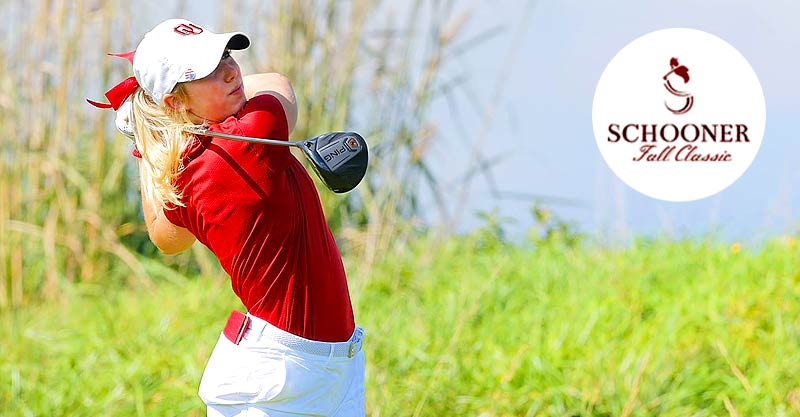 NORMAN – The Oklahoma women’s golf team is set to open its 2020-21 season on Sunday when it tees off at the Schooner Fall Classic. This year’s edition of the Classic marks the seventh year that Oklahoma has played host to what has become one of the premier women’s collegiate golf events in the country.

“First and foremost, I’m extremely grateful for all the hard work that our VP for Intercollegiate Athletics, Joe Castiglione, and other administrators put into ensuring that we play golf this fall,” head coach Veronique Drouin-Luttrell said. “I’m so excited to have the team back in Norman. For the last few weeks, we’ve adjusted our practices due to COVID-19 and have been able to focus on each individual more than ever, which we hope will pay off. We must continue to trust the process and this weekend is no different, even though we are playing at home we need to play our own game.”

Play opens with 36 holes on Sunday at the par-70, 6,094-yard at Belmar Golf Club in Norman, Okla. Teams will finish the event with 18 holes on Tuesday. The No. 28 Sooners will host Arkansas State, No. 20 Baylor, Iowa State, Kansas, Kansas State, North Texas, No. 17 Oklahoma State, TCU, No. 2 Texas and No. 24 Texas Tech. Teams will play in groups of five and with carts to expedite safe play.

The Sooners enter year 12 under Drouin-Luttrell in 2020-21. After taking over a program that finished in 10th place or worse in half of its events in 2008-09, Drouin-Luttrell has guided OU to top-five showings in 45 of 94 tournaments (48 percent) during her tenure, including in 32 of 54 events (59 percent) from the 2010-11 through 2014-15 seasons. OU has won nine tournaments under her direction and has qualified for the NCAA Tournament on six occasions. The top 18 54-hole scores in school history have come under her watch, and she has presided over the 20 lowest rounds in OU annals. Additionally, Drouin-Luttrell’s teams are responsible for the 10 lowest team scoring averages in program history.

Monday’s final round will have two live streams on Sooner Sports TV, with one following the Sooners’ group and another providing coverage of the final two holes. Monday’s coverage will be broadcast at 10 a.m. CT on Fox Sports Oklahoma and Fox Sports Southwest.

Libby Winans, Jr., Richardson, Texas: Winans has tallied 49 competitive rounds for the Sooners during her two years in Norman, shooting par or better 18 times … Finished T7 at the 2018 Schooner Classic after firing a 206 over three rounds, tied for the sixth-lowest 54-hole score in OU history … Owns six career top-10 finishes, second-most on the team … Set the Oklahoma freshman scoring record in 2018-19 with a 72.59 … Has one collegiate victory (Clover Cup 2019) … Currently holds the third-best career scoring average vs. par in Oklahoma history (+1.22).

Kaitlin Milligan, Sr., Norman, Okla.: Leads the Sooners with 91 career rounds and team-high 45 rounds of par or better golf … Ranked No. 58 in latest Golfstat ranking … Career scoring average vs. par of +1.08 is the second-best in program history … Has 17 top-20 finishes, 10 top-10 finishes and six top-fives, including a win at the NCAA Norman Regional in 2019 … Set OU scoring record in 2019-20, firing an average of 71.40 … Owns school records for the lowest individual round (62) and the lowest 54-hole score (199) … Has been Oklahoma’s top finisher at nine events.

Hannah Screen, Sr., Berkhamsted, U.K.: Making her Sooner debut after sitting out spring 2019 due to transfer rules … Transferred from Houston where she lead the Cougars to an AAC championship in 2019 en route to an All-AAC First Team nod … Ranked No. 100 in Golfstat’s latest ranking … Represents England as a member of the national overseas’ team … Played in the 2019 Schooner Fall Classic while at Houston, tallying a career-low 54-hole score of 210 to finish T10.

Ellen Secor, Gr., Portland, Ore.,: Played in four events for the Sooners last spring after transferring from Colorado State … Finished in second place at the Westbrook Invitational after shooting a 203 at the event, the second-lowest three-round score in OU history.

Maria Fernanda Martinez, R-So., Veracruz, Mexico: Appeared four times for the Sooners in 2019-20, posting a scoring average of 73.91 … Fired a career-low round of 71 at the White Sands Invitational en route to a T21 finish.

The Sooners have had success at their home event, setting multiple program records over the years. In 2018, Oklahoma set program records for lowest team round (267) and lowest three-round (831). Under head coach Drouin-Luttrell, the Sooners have three top-five finishes at the Schooner, most recently in 2018.

The seventh-annual Schooner Fall Classic will be played at Belmar Golf Club in Norman, Okla., a par-70, 6,094-yard course.

Fifty-four holes will be played over two days. Tee times will begin at 8:30 a.m. CT on holes No. 1 and No. 10. All teams will play in groups of five with their respective teammates.

Sunday: Mostly sunny with a high of 87 degrees and wind out of the south at 15 mph.

Monday: Mostly sunny with a high of 68 degrees and wind out of the north at 17 mph.